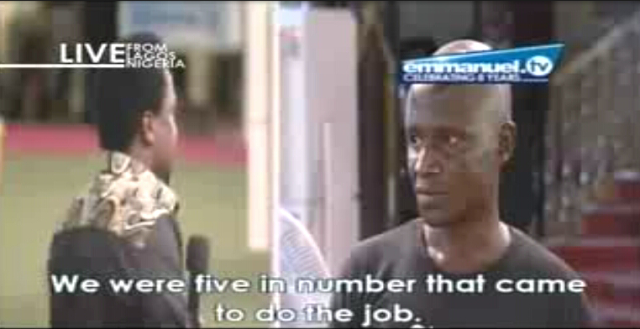 As the rest of the world struggles to grapple with the mystery surrounding the sudden disappearance mid-air of a Malaysian Airlines flight MH307, Senior Prophet of the Synagogue, Church of All Nations, SCOAN, T.B Joshua has revealed that the plane crash-landed into the sea and is buried deep underneath the waters.

Information Nigeria reports that the Boeing 777 aircraft vanished off the coast of Vietnam two hours after taking off at the Kuala Lumpur airport with 239 souls on board in the early hours of Saturday.

But on Sunday morning during a live service, the highly controversial Prophet said this concerning the missing Malaysian aircraft: “The plane concerned is deep inside the sea. Some of the particles will be seen on the surface of the sea any moment from now.

“May their souls rest in peace. We pray the Lord gives the family and loved ones the strength to bear the loss. Our prayer and love are always with them, the nation of Malaysia and other countries who had passengers on this flight”, he said.

Meanwhile, it was learnt that a plot by members of the Boko Haram sect to bomb the SCOAN headquarters in Ikotun-Egbe, Lagos State was unsuccessful as one of the potential bombers confessed purportedly to the act yesterday.

The suspect, who gave his name simply as Mustapha from Adamawa State, confessed that they were five in number but four of them “scattered” away following what he said was “confusion” in their midst.

“We were five in number,” he said. “We dropped at the junction opposite from (sic) the church. There was a man who used to sell something opposite the church here. He is selling sweets, soap and cigarettes. I met the man and asked him to help me keep the bag I was carrying. It contained some instruments – bombs, to destroy people”.

However, Mustapha said the local trader refused to collect the bag. “We decided to sit down and eat before going on our mission here. Our plan was to take souls, to destroy at this Synagogue Church”.

Mustapha recounted a strange incident that took place as they sat down to eat at a restaurant opposite the popular church. “They brought food for us and we were eating. At that place, they had television. We were watching the television and discussing. It was Emmanuel TV – I saw you (T.B. Joshua) preaching to people”.

Mustapha told the stunned congregation that he had never been in a church before and had no idea who T.B. Joshua was. “By the time you prayed and laid hands on the screen, it was like you were there with us and you joined our midst. As you laid your hands on the screen, you laid your hands on our face. That was when confusion came between us; everybody scattered”, he confessed.

“Since that day, I wanted to go home but I am not fit. Any time I lie down, I will be seeing you (T.B. Joshua) in my dream. You are disturbing me. I don’t know what I did to you. The thing is bothering me too much.”

Asked to explain further, Mustapha revealed, “In my dream yesterday, you told me that the group of Boko Haram would not exist again. I want to go but I don’t have the spirit to do it again. I don’t sleep in the night; I always see you. You are disturbing me. You keep praying for me and laying hands on me. I want to sleep well. I cannot close my eyes without seeing you (T.B. Joshua). Please, help me”.

Affirming the plot to bomb his church, Joshua said he had been forewarned by God of the impending attack several weeks ago, prompting him to go into intense prayers.

“I have been in a serious battle for the past two weeks. Those who looked at my knees yesterday will know that this is what I wore last week”, Joshua stated, explaining that he wore the same pair of jeans for the past few weeks which were clearly soiled from prolonged prayer sessions.

“It was not a surprise to me because I have seen it. My mission is to separate him from the spirit that is controlling him to do that. We are not to fight mere flesh and blood”, the pastor explained.