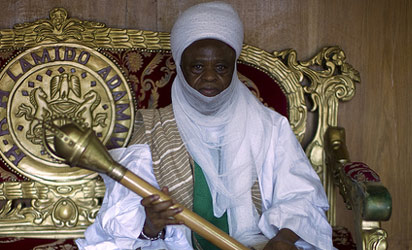 More than a week after it was inaugurated by President Goodluck Jonathan, the National Conference, Wednesday, showed signs of a huge crack as one of the delegates from the North threatened that the region might stage a walk-out if the grandstanding over the mode of voting is not resolved.

The Lamido of Adamawa, Dr. Muhammadu Barkindo Mustapha, dropped the bombshell immediately the delegates settled for the day’s business yesterday.

Nominated as a delegate on the platform of the National Council of Traditional Rulers of Nigeria, Dr. Mustapha accused some of his co-delegates of taking a different path contrary to modalities for the conference.

Although conference Chairman, Justice Idris Kutigi called for comments on whether the conference would call for memoranda from the public on its assignment, Dr. Mustapha, when given the microphone to contribute to the matter, instead launched a tirade in what some delegates have described as “an attempt to frighten the South”.

Dr. Mustapha’s comment, a delegate said, “may have been rehearsed at a meeting of a group of northern delegates last (Tuesday) night”.

The royal father warned that the North should not be pushed to the wall because it would simply walk-out of the conference and if that happens, there would be great consequences for the country.

Some delegates uncomfortable with his statement attempted to shout him down, but he was not ruffled and even when shouts of “no, no, no” rang throughout the conference hall, Dr. Mustapha would not stop as he looked determined to bare it all.

At first, Justice Kutigi attempted to call him to order; he later urged him to continue.

The royal father made it clear that he was sounding a “note of warning” before it is too late.

He noted that it was obvious that if the country disintegrated, many of the delegates shouting him down would have no place to run to.

And for all he cared, the people of Adamawa and a lot more people he did not specify will be welcome in Cameroon.

His kingdom, he said, extends to the Republic of Cameroon, especially the place called Adamawa State in Cameroon.

He said: “I just want to sound a note of warning and that is why I requested to be given time to speak before the start of business today,

“The note of warning I want to sound is that we should not take a cue from the so-called civilised people of western countries because they are always after their own interest and they can use anything – coercion, force and other means to protect their interest.

“Listening to the debates and the behaviour of some delegates here, it really beats my imagination how a gathering of people like us will behave like the way we are behaving.

“Mr. President delivered his address here and he laid down what we are supposed to discuss, but many people here, sorry to say, especially some elder statesmen who claimed to be strong loyalists of Mr. President…”

There was shout of “point of order” from those who felt slighted by what Dr. Mustapha was saying.

Justice Kutigi said: “Mr. Speaker, the issue is whether you want the public to be invited to serve memoranda here”, to which the Lamido responded: “Mr. Chairman, that is not my request”.

Then more shouts of “no, no, no”. Justice Kutigi interjected at this point and urged Dr. Mustapha to go on.

The royal father continued: “But, unfortunately, these people are in the forefront to contradict what Mr. President said. At the rate we are going, in the long run, this conference may not achieve its purpose”.

As more shouts of “no, no, Mr. Chairman, no” rent the air, Justice Kutigi pleaded with the delegates to allow Dr. Mustapha to conclude his speech.

Dr. Mustapha continued: “In the long run, if we are not careful, this conference will flop – God forbid. And if it flops, the resultant effect cannot be predicted by anyone of us here.

“If something happens and the country disintegrates – God forbid – many of those who are shouting their heads off will have nowhere to go.

“I and the people of Adamawa – and many others – have somewhere to go. I am the Lamido of Adamawa and my kingdom transcends Nigeria and Cameroon.

“A large part of my kingdom is in the Republic of Cameroon, apart from my kingdom in Adamawa.

Dr. Mustapha continued: “Part of that kingdom in Cameroon is called Adamawa State, in Cameroon. So, you see, if I run to that place, I can easily assimilate but I want to plead with us to adhere to laid down rules by Mr. President in his address, which include issue of voting.

“Unless you want to disobey the President, then you can do whatever you want and if we are pushed to the wall, we will easily walk out of this conference.

“Jingoism is not a preclusive of anyone; everyone here is a potential jingoist”.

When Dr. Mustapha said “if we are pushed to the wall, we will easily walkout of this conference”, there was a sustained “no, no, no”, which apparently forced him to take his sit, albeit a satisfied man.

The conference adjourned plenary to tackle the controversial mode of voting.