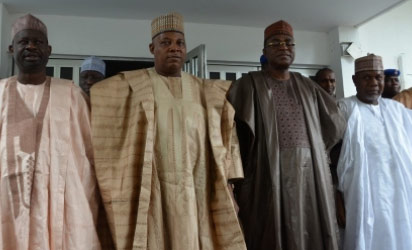 Disturbed by the wanton destruction of lives and property by Boko Haram sect members, governors in the North-East zone of the country, on Wednesday declared that ‘enough is enough’ even as they proposed moves to dialogue with the insurgents and bring the cycle of violence in the region to an end.

To achieve this objective, the governors of Bauchi, Taraba and Gombe states, yesterday, met for several hours in Gombe and mapped out strategies aimed at appeasing the sect members to lay down their arms and embrace dialogue.

Malam Isa Yuguda (Bauchi), Alhaji Ibrahim Dankwambo (Gombe) and Alhaji Garba Umar (Taraba), first met in Gombe and resolved to do everything possible to reach out to the sect members and explore the possibility of convincing them to come to the negotiation table.

The meeting also resolved that dialogue, rather than force, would be the best option in dealing with the terrorists, who have put up a defiant position, since the military campaign to bring their reign of terror to an end began last year. The governors affirmed that the terrorists are so resolute in their ways that they cannot easily be dislodged with force. They also reasoned that as governors, who were elected to protect lives and property, it was incumbent on them to take whatever measures possible to end the orgy of violence that is fast destroying the economy of the North and its environs.

In particular, the governors resolved that the incessant killings being carried out by the insurgents particularly in Borno, Yobe and Adamawa States, must stop so that peace could be restored to the region.

The governors, who condemned in very strong terms the menace of Boko Haram, noted that if not properly checked, it would spread to other parts of the country and become a national problem.

Gov. Yuguda of Bauchi State, who initiated the meeting, said that they had to take action to put an end to the violence in the North-East so that the economy and the safety of the people were not put in permanent jeopardy.

Yuguda said: “As leaders, who have sworn to protect the lives and property of our citizens, we owe it a duty to take necessary measures to save our people in times of threat such as we have been witnessing in recent times.

“We have resolved to come up with strategies that would rebuild the destroyed areas and give hope and succour to our people over time”.

He pleaded with members of the sect to stop the carnage, as according to him, there is no religion that preaches violence or advocates the taking of another person’s life.

“For Allah’s sake, we are appealing to whoever is behind the wanton killings and destruction of property in the region to stop, and let us sit down and chart the way forward to ensure that peace and unity return to the North-East in particular and Nigeria as a whole.

“We are, therefore, looking forward that in the next few weeks, our young ones who have been perpetrating such deadly act will come forward so that we will collectively talk on how to iron out our differences”, Yuguda appealed.

After meeting in Gombe, the three governors later proceeded to Maiduguri, the hotbed of Boko Haram activities, where they met and commiserated with their Borno State counterpart, Alhaji Kashim Shettima on the series of attacks in the state, which had claimed thousands of lives and property in recent times.

The Acting Governor of Taraba, Alhaji Garba Umar, offered prayers for the repose of the souls of the victims of the terrorist attacks in the region and for the restoration of peace.

In his response, Governor Shettima thanked his colleagues, who all belong to a different political party, for their visit to him and the people of the affected communities in the state.

“On behalf of myself, my family and the people of Borno State, we will remain ever grateful for this visit and the support you have personally and collectively rendered to us since the beginning of this Boko Haram crisis”, Shettima said.