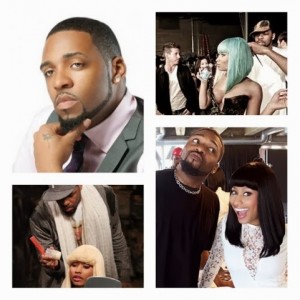 Nicki Minaj has a case to answer in court has she is being sued for $30 million by her ex-wig maker/hair stylist, Terrence Davidson. On February 21, Davidson filed a suit against Minaj in Atlanta claiming that the singer/rapper breached their deal and went ahead to sell his products on her website.
Speaking to CNN, Davidson and his attorney, Christopher Chestnut, said the rapper now markets and sells Davidson’s wig on her website with the accrued money going into her purse, ‘I see these wigs online, People are basically duplicating what I created for Nicki Minaj,’ said Davidson. Chestnut also added, ‘Nicki Minaj is reaping great success and financial bounty reward for Terrence’s creative expertise, and he is entitled to participate in that. Someone’s got to stand up for the artist. We applaud the fact that she’s making millions, but she’s also got to pay bounty to those whose creative designs she’s making millions off of.’
Davidson claims he’s been making wigs for Minaj since 2010 and also gave her a unique sense of style ranging from blonde to pink wigs. He said they had earlier planned on launching a wig line in the nearest future but the rapper kept mute on that until he saw her posts on her website. Copyright Issues OR Royalty ?
What’s your take on this?