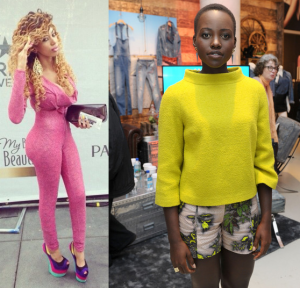 Dencia is obviously still taking Lupita’s speech about bleaching really hard and here is what she wrote on Instagram:

“The Media has told their version about how the Lupita Dencia ish started & claimed it was Dencia when I didn’t know this woman until she mentioned me & I can Authoritatively tell u she lied about the letter, someone who works in her Camp reached out to me & told me there was no letter & the story was made up after I said I didn’t know who she was. I know u guys are like why I’m I still on it but I was really disappointed when I was told she lied, I was really hoping there’s a letter, the person in her camp who reached out doesn’t wanna go public but the person said it in front of me & 2 other people. They read about me, I am doing charity work, building and orphanage and she has nothing charitable going on so standing for a cause she can’t even ever fight n Tryna come 4 me is total BS, u wanna talk bleaching but u are smiling ur eyes off in pictures with Rihanna? smh make up ur mind on a cause n fight for it woman by the time I turn 31 which is 6yrs from now, come back let’s talk. I rest my case & done with this topic!!!”

But hey Dencia, I think every1 is entitled to their opinion, Lupita’s opinion will not stop people from bleaching. But she has a right to say what she feels about bleaching.