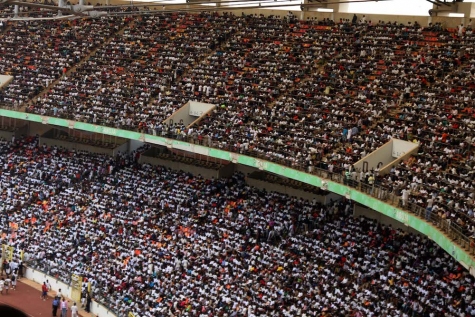 The applicants had converged on the National Stadium, Abuja, one of the venues for the test to fill 5,000 vacancies in NIS and many were said to have arrived at the centre before 6a.m..

The service had fixed the test nationwide for the 7, 000 applicants for the available jobs.

However, a stampede ensued at the FCT centre about 7a.m. when the screening of candidates was to start for the test scheduled for 4p.m.

Mr Tayo Haastrup, the spokesman for the hospital, told the News Agency of Nigeria (NAN) that the seven, five women and two men, were brought in dead and that the bodies had been deposited at the mortuary.

“The hospital received some casualties from the stampede from the ongoing Immigration recruitment at the National Stadium.

“Those that died were seven in number, five women are and two men, their corpses have been deposited at the mortuary”, Haastrup said.

He said the hospital was stabilising those brought in unconscious from the stampede, while other casualties had been taken to other hospitals, including Asokoro General Hospital.

NAN recalls that in 2008, no fewer than 20 people died in various states of the federation during a similar exercise conducted by the Ministry of Interior for Nigeria Prisons Service, Nigeria Immigration Service and Customs Service. (NAN)