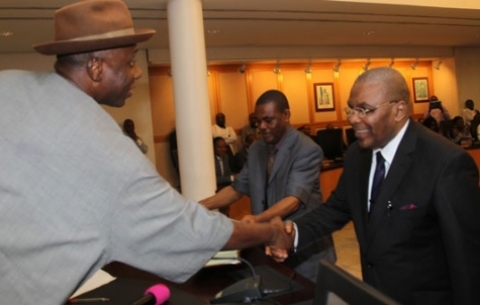 The judicial crisis in Rivers State took a turn for the worse on Thursday as the National Judicial Council suspended the newly sworn-in Chief Judge of the state, Justice Peter N. C. Agumagu.

The suspension is with immediate effect.

A statement from the Acting Director of Information in the NJC, Mr. Soji Oye, said the Council took the decision at an emergency meeting yesterday.

The statement explained that Justice Agumagu’s appointment as the substantive head of the state’s judiciary was illegal, as it did not comply with the provisions of section 271 of the 1999 Constitution, which stipulates that a state governor must appoint a Chief Judge on the recommendation of the NJC.

The NJC stressed that it did not recommend Agumagu for appointment as the state’s Chief Judge. Rather, it recommended the most senior judge of the state high court – Justice Daisy Okocha – but she was rejected by the state governor, Rotimi Amaechi.

Besides the suspension, Justice Agumagu is also facing dismissal as the NJC has queried him, asking him to explain within four days, why he should not be dismissed as a judicial officer for failing to abide by his Oath of Office to uphold the constitution.

The statement reads, “At its 10th emergency meeting, which was held on the 26th March, 2014, the National Judicial Council under the chairmanship of Hon. Chief Justice of Nigeria, Hon. Justice Aloma Mariam Muktar, considered the purported appointment, confirmation and swearing-in of Hon. Justice P. N. C. Agumagu as the substantive Chief Judge of Rivers State on the 18th day of March, 2014.

“In the course of deliberations on the matter, Council noted that it is expressly provided in Section 271 (1) of the Constitution of the Federal Republic of Nigeria, 1999 (as amended) that the appointment of a person to the Office of the Chief Judge of a State shall be made by the Governor of the State on the recommendation of the National Judicial Council, subject to the confirmation of the appointment by the House of Assembly of the State.

“The National Judicial Council did not at any time make any recommendation to the Governor of Rivers State that Hon. Justice P. N. C. Agumagu, President, Customary Court of Appeal, be appointed the substantive Chief Judge of Rivers State.

“That the National Judicial Council does not and will not recognise Hon. Justice P.N.C. Agumagu as the Chief Judge of Rivers State.

“That the general public and all concerned in the matter, particularly the Governor of Rivers State, the Rivers State House of Assembly, the Judiciary in Rivers State, be notified and informed that the National Judicial Council will not deal with Hon. Justice P.N.C. Agumagu as the Chief Judge of Rivers State.

“That a query be issued to Hon. Justice P. N. C. Agumagu to explain in writing within four days, why he should not be removed from office as a judicial officer for his failure to abide by his Oath of Office to uphold the Constitution and Laws of the Federal Republic of Nigeria.

“In the meantime, Council in exercise of its powers under paragraph 21 (d) of Part 1 of the Third Schedule of the 1999 Constitution, has suspended Hon. Justice P. N. C. Agumagu from Office as a judicial officer with immediate effect”.