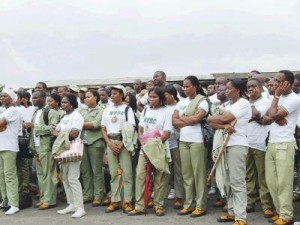 The National Youth Service Corps (NYSC) has deployed 1,910 corps members to Gombe State and terror-hit Borno State for the 2014 batch ‘A’ Orientation Course to be hosted in Gombe state.

This is contained in a press statement signed by Miss Margaret Dakama, Head, Public Relations Unit of NYSC in Gombe on Friday.

The statement said 1,090 corps members were for Gombe state while 820 were for Borno.

The statement said that Gombe State was once again hosting corps members deployed to Borno for the three weeks orientation at Malam-Sidi Orientation Camp.

According to the statement, the orientation will commence on March 11 and end on April 1.

It also asked for the support and cooperation of the people of Gombe state in directing participants to the venue of the orientation.

The statement stated that Gov. Ibrahim Dankwambo of Gombe would be the special guest of honour at the opening ceremony.

It will be recalled that Gombe state hosted the orientation course of the Borno 2013 batch ‘C’ corps members. [NAN]