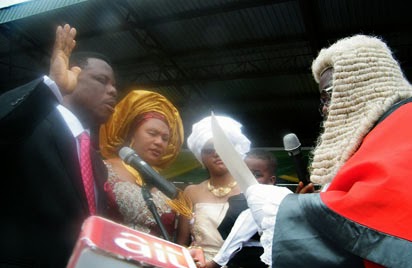 The curtains were yesterday drawn on the eight year tenure of Chief Peter Obi, as he handed over power to his successor, Willie Obiano, at a colorful ceremony witnessed by thousands of people from all parts of the country and Nigerians in Diaspora.

The eager crowd started converging on the famous Alex Ekwueme Square in Awka, the Anambra State capital as early as 8 am and by the time the ceremony commenced at about 2PM, the square and the adjoining areas were already filled to capacity with attendant traffic gridlock in the city.

Peter Obi with the Chieftancy title of “Okwute”, which means the stone that cannot be broken and by this development, Obi, who leaves office tomorrow has now become a first class chief.

The former governor, Obi, who on Saturday was conferred with the chieftaincy title of “Okwute” (the rock that cannot be broken) by the Anambra State Traditional Rulers Council, after inspecting a guard of honour mounted by the police, made a valedictory speech in which he expressed joy that the state has regained its lot glory.

Describing his successor as lucky, Obi recalled that after his swearing-in in 2006, there was no office for him to move into and no provision for official car, but the story has changed as the new governor was lucky to have such privileges in place. He also said that Obiano was taking over at a time the state is financially stable and appealed to the people of Anambra State to extend the same level of cooperation he enjoyed throughout his tenure, to the new governor.

Special adviser to President Goodluck Jonathan on Inter-Party Matters, Senator Ben Obi, who represented the president at the occasion, urged the new governor to continue the good works of his predecessor.

He also confirmed that the ex-governor will soon become a member of the Federal Executive Council.

Governor Obiano in his speech thanked the people of Anambra State for voting him and his deputy, Dr. Nkem Okeke in to serve them and promised that they would not regret their decision.

Part of his eight page speech read: “Beloved Anambrarians, with humility, I stand before you today, to accept this historic responsibility that you have given to me to serve. Our great leader, Dim Chukwuemeka Odumegwu Ojukwu, advised Ndigbo that only wise political choices would ensure their survival as a nation within a nation. I am proof that you heeded that advice.

“Ndi Anambra, I wish to assure you that you made a wise choice when you voted me and Dr. Nkem Okeke as your governor and deputy governor. Not only that, in voting for our great party, the All Progressive Grand Alliance, you once again listened to the wise advice of the great American Civil Rights leader, Dr Martin Luther King Jnr, that; ‘We must learn to live together as brothers or perish together as fools’.

“Let me quickly say that the occasion we have today is not a celebration of the victory of one party over another but the triumph of the human will over the challenges that make democracy a reluctant seed to grow in Africa. Fellow citizens, barley 10 years ago, the situation in Anambra State was so appalling that Anambra’s famous son and writer, Chinua Achebe referred to it as a place where a small clique of renegades had turned into a ‘bankrupt and lawless fiefdom’.

“To the glory of God, the tables turned against enemies of Anambra when our great leader, Dim Chukwuemeka Odumegwu Ojukwu built a new political ark for our people and gave us a fighting chance in the ever-threatening flood of Nigeria’s political climate. Today, our story is different.

“After eight years of a remarkable leadership under the All Progressive Grand Alliance (APGA), our narrative has changed from the story of near-bankruptcy to that of the only state in the federation that hosts Nigeria’s first indigenous automobile manufacturing plant. Yes, it is a thing of pride to know that our brother, Dr Innocent Chukwuma has launched Nigeria into a new industrial orbit by fulfilling the country’s dream of indigenous automobile manufacturing with Innoson Vehicle Manufacturing Limited, Nnewi. The story of Innoson is the story of courage and vision. It is the narrative of the New Anambra!” Gov. Obiano said.