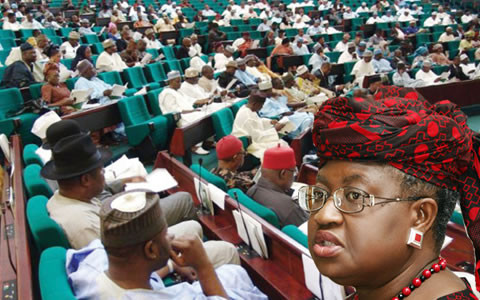 The Minister of Finance and Coordinating Minister for the Economy, Dr (Mrs) Ngozi Okonjo-Iweala, has described as “ridiculous and false” allegations by Chairman of the House of Representatives Committee on Public Accounts, Hon. Solomon Adeola Olamilekan that N24bn was missing from the Police pension account.

Rep. Olamilekan on Thursday while insisting that the N24bn was missing, accused Mrs. Okonjo-Iweala of brandishing fraudulent, forged and fake documents – which cannot stand the test of time – to defend her position that the fund was intact and challenged her to a public debate on the matter.

But the minister in a statement issued on Friday night by her Special Adviser Communications, Mr Paul Nwabuikwu, maintained her stand that the money was not missing adding that it is an irony that the federal lawmaker is attacking her for taking action to ensure that public money was not stolen, but put back into the treasury where it belongs.

The statement reads, “It is unfortunate that the Chairman has persisted in using his privileged platform to disseminate such distortions even though the Minister has repeatedly explained to the Committee that the money was an overpayment based on the demands of those trying to steal from pension funds which was successfully blocked and the money returned to the treasury by the minister.

“This persistence in peddling this untruth suggests that this is yet another attempt to tarnish the image of the Minister for partisan political reasons and to take public attention away from the positive efforts to reform the historically problematic pensions sector.

“It is indeed a sad irony that the Committee Chairman is attacking the Minister for taking action to ensure that public money was not stolen, but put back into the treasury where it belongs”.

The statement further explained that the said amount was returned to the treasury well before the DG of Pension Transitional Arrangement Department, Mrs. Nellie Mayshack, was appointed adding that the effort by Rep. Olamilekan to use her to confirm that the amount is missing is contrived and deceptive.

“The Minister is currently out of the country but she is ready and willing to take up the challenge posed by the Committee Chairman for a public discussion on the issue.

“Beyond this issue, she also looks forward to the opportunity to throw light on the status of pension reforms and the Federal Government’s efforts to fix the problems of the sector in a sustainable way”, it concluded.