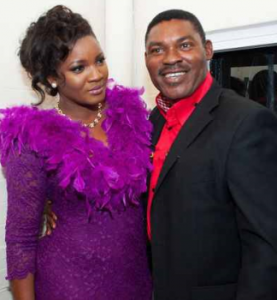 Award-winning actress and one of TIME 100 most influential persons, Omotola Jalade Ekeinde, in a new interview with Punch revealed she does not believe in gender equality, that men and women were not created by God to be equal in any way.

How can a woman have a successful marriage?

Omotola: I don’t believe in gender equality. I do not believe that God made man and woman to be equal in any way. I believe that in every organised institution, there is always a head and an assistant. It doesn’t mean that one should take the other for granted, or disrespect the other. I believe the husband is the head of the home and the wife is an assistant. My husband is a pilot, I have flown with him several times and I understood that there is a captain and a co-pilot. They are both responsible for the passengers’ lives. But when there is a final decision to make, it is up to the captain to make it. He is more experienced and the one with the responsibility. But any mature captain will not ignore his co-pilot because the co-pilot is not a cabin attendant. He is there for a reason. It just depends on how you understand and play your roles. I believe women should understand this. When a woman starts a struggle for power tussle with him, it tends to cause friction in the home. The woman should give the man the respect as the head of the home and also prove herself as a worthy co-pilot. He needs to see you as a reliable co-pilot. Sometimes, he may not be the one running the house day-to-day, you are the one to take decisions but you have to do it in such a manner that he is comfortable enough to see you as someone he can rely on. When you have a proud and egocentric husband, hand him over to God. If you feel like your life is being threatened, or that of your children, get yourself out of that situation. You owe your children that. Try separation for a while, but before that, you must have tried other things. I do not believe that people should throw in the towel in their marriage at every flimsy excuse. You must have been a diligent wife and tried prayers and intervention. If all those fail, then you can remove yourself from that situation. Also, couples should be friends and communicate. What we call love sometimes fizzles out. True love comes from friendship. When you don’t feel those initial sparks, friendship is what keeps you together, until when the spark comes again.