The Governor of Oyo state Abiola Ajimobi and heads of security agencies visited the “forest of horror” on March 24, 2014, Monday. Unfortunately, beefed-up security and tensions between the police and the youths resulted in the death of a woman, who was allegedly killed by a stray bullet during a clash. 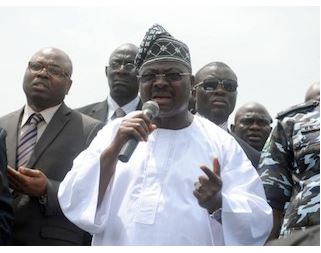 The main entrance to the forest was cordoned off by the police to prevent more residents from thronging the site. The place has been attracting crowds of people since the news broke on March 22, 2014, Saturday. However, the security agencies won’t let anyone pass.

The middle-aged woman, whose identity is currently not known, was hit in the chest by the bullet. The wound was fatal, as she died on the spot.

In a reprisal, two vehicles – one a shuttle bus (Ajumose shuttle) and another belonging to the Ibadan zonal station of the Nigeria Television Authority (NTA) – were vandalised.Some of the youths stripped themselves naked in protest over the shooting of their colleague.

The convoy of Gov. Ajimobi was flagged down by the crowd of residents, who reported what they called “police wickedness” and called for Justice.

Policemen stationed an Armoured Personnel Carriers a few metres away from the entrance to the forest to prevent residents from visiting the site.

The governor responded, urged the residents not to take the law into their hands. He also promised to address the issue.

Security chiefs have accompanied Ajimobi in his walk round the forest. The governor was moved at what he saw, described it as “man’s inhumanity to his fellow man”.

Ajimobi called for a minute of silence and led prayers for the repose of the souls of those who died.

The governor announced the revocation of the Certificates of Occupancy (C of Os) of the expansive forest and directed that the bush be cleared. He also pledged that the entire area would be combed by security agencies to fish out the perpetrators and bring them to book.

“Even though we were told that the inhuman transactions here had been in existence for over 10 years, we will dig it up,” the governor promised.

Ajimobi said it was unbelievable that an event as horrendous as this had been going on in the neighbourhood for over 10 years and the people living in the area had not alerted security agencies about it.

He told the crowd that the unemployed youths in the area would get automatic employment in the State Youth Empowerment Scheme (YES-O). Everyone who would be interested in the job should register with the village head.

The governor also promised to meet with the community next month on their needs, with a view to addressing them.

However, the members of community told that governor that they had reported the matter to the police stations at both Soka and Toll-Gate, but “there was no serious response from them”.

Therefore the residents asked the governor to investigate the involvement of the police in the matter with a view to get to the root of the matter.

It would be added that more fresh human parts were reportedly discovered in an abandoned building in Soka, Oluyole LGA of Oyo, in both on-ground and underground premises.