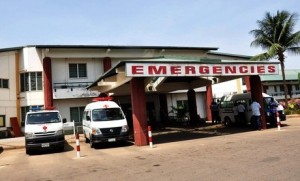 In what many would tag as glorious transition, a 55-year-old cleric, simply identified as, Timothy Elugbemi,reportedly drove himself to a hospital in Sango Ota, Ogun State, shouted ‘hallelujah’ and passed on.

It was gathered that the late cleric was attended to by Dr. Ayo Adeoye, proprietor of Lolade Clinic and Maternity Home, where he checked in for medical attention before he died.

Confirming the incident, Dr. Adeoye said the clergyman complained of feeling unwell and was subsequently attended to.

He said that after being confirmed medically fit, the pastor exchanged pleasantries with the nurses at the reception, but suddenly started saying “halleluyah.”

Adeoye said: “I cannot believe this. This was a man who drove himself into the hospital and was attended to and equally found fit.

“He suddenly started saying ‘halleluyah,’ ‘halleluyah’ and before we knew it he lost consciousness and died. I have never witnessed this type of incidence since I started my medical practice,” he said.