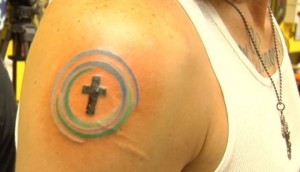 When Pastor Zack Zehnder flippantly offered free tattoos to his congregation, little did he expect people to actually take him up on it. During a recent sermon about acceptance at the Cross Mount Dora church in Mount Dora, Florida, the pastor had said: “If anybody would like to go out and get a tattoo of the logo of the cross that we have for this church we will find money and pay for that.” I suppose he didn’t realize exactly how popular tattoos are – at least a dozen church members have already inked themselves with the church cross logo.

Jeremie Turner, one of the congregation members who got inked, said: “We definitely took him up on his offer because if he’s going to hand out free tattoos, he’s got a crowd of people that’s going to accept them.” When pastor Zack realized what was happening, he graciously stuck to his word and personally paid for the tattoos at Bill Gold’s Tattoo Shop. “If I wasn’t so dang sarcastic in my sermons, I don’t know that we would be here,” he said, while overseeing a church member getting inked at the shop. “But we got some crazy people that have said they wanted to do it so I kinda gotta, I made the promise. I kinda gotta back it up.”

It’s nice to see  pastor Zack standing by his promise, instead of making excuses to try and get out of the deal. He even hopes that the new tattoos will serve as conversation starters and get more people interested in the church. “People’s perception of church has probably never been as negative as it is today and so if we can do something to kind of flip that script and interact with them and do something in a unique and creative way, we’re going to do that,” he said.

Church member Holly Stratton agrees with the pastor. ““I think that we’re in a different time and a different place now and I think it’s wonderful that we think outside the box a little bit,” she said.

“Wouldn’t really expect, a little unorthodox for a church, but you know, leave it to anybody, Zack would be the one to do it,” admitted William Trigg, another member.

Jeremie also insisted that despite all the tattoos, the church wasn’t very progressive. “You know, a lot of people like to say that we’re progressive. I don’t think we’re progressive at all. We’re very conservative with what we believe. If you look at the bible closely, it tells us that we have a lot of freedoms.”

Even though pastor Zack’s comment was unintentional, he’s quite happy with the way things have turned out. “I think it’s pretty neat that these guys are going to be walking out of here with a testimony and a chance to share God’s story with people that maybe I never would or maybe you never would, that don’t have tattoos,” he said.

But this isn’t the first time churches and tattoo parlors have joined hands. The church itself is located inside a shopping mall in Michigan, and the tattoo place was added to reach out to people who are uncomfortable with traditional places of worship. There’s also Pastor Jamie Bertolini of Greer Mill Church in South Carolina, who is the owner of Trinity Tattoo Company. He thinks that it is an ‘absolutely wonderful opportunity to share the love of Jesus Christ’. And Eddie Smith, an ordained minister from Oklahoma, has been tattooing for the past 20 years.