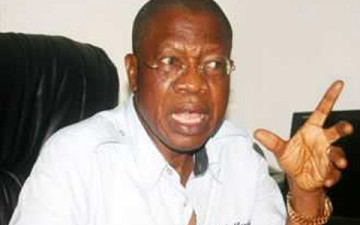 The senator representing the Lagos Central Senatorial District, Mrs. Oluremi Tinubu, has predicted electoral victory for the All Progressives Congress (APC) in the 2015 general elections.

The former Lagos State First Lady, who was speaking at the 10th Town Hall Meeting of the senatorial district held in Lagos yesterday, assured the audience that the APC would usher in the dawn of a new era and engineer development across the country in 2015.

Her position was reinforced by the party’s Interim National Publicity Secretary, Alhaji Lai Mohammed, who was hopeful that APC would form the next government at the centre. He was a guest speaker at the event.

Mohammed based his assumption on what he termed the growing popularity of the party across the country in less than one year of its registration by the Independent National Electoral Commission (INEC).

Calling on Nigerians to reject the ruling Peoples Democratic Party (PDP) at the polls, Mohammed alleged that PDP members in government spent N49 billion alone on medical treatment abroad last year. This sort of reckless spending, the opposition party’s spokesperson assured, would not be tolerated under an APC-led federal government.

In her address on the occasion, Mrs. Tinubu stated that by the grace of God and with the active support of Nigerians, the APC will continue to gather momentum and lead Nigerians to a new democratic dawn.

She said: “As you are all aware, the wind of change from the APC is also blowing through the National Assembly and indeed, the entire country. The Independent National Electoral Commission (INEC) granted our collective request for registration of the APC on July 30, 2013”.

The senator recalled that on September 17, 2013, a letter formally announcing the birth of the APC and the status of senators of merged parties was read on the floor of the senate.

“Now, there is no looking back as we strive towards building a strong and enduring democracy”, she said.

On her activities in the senatorial district, Mrs. Tinubu reported that “last year, we got constituency projects ranging from N15 million to N21 million in education”. She gave the names of the schools that benefitted as follows: Jibowu High School, N21m; Banjo Primary Scool, Otumara-Ilogbo in Ebute Metta, N20m; Ansar Ud Deen Primary School, Oke Popo, Lagos Island, N15m; and The Holy Trinity Primary School, Ebute Ero, Lagos, N15m – the project was later transferred to Teslim Elias Primary School, Oja-Oba in Isale Eko due to space constraints at the former.

“The construction and furnishing of one block of three classrooms and VIP toilet at Ire-Akari Primary School, Orile, Apapa Iganmu and Christ Cathederal Church Primary School, CMS, Lagos have been completed and we expect that work should be concluded at other project sites in due course”, she said.

She added that the pioneer trainees under the Youth Empowerment and Skills Acquisition Scheme (YESAS) were given a business start-up kit and a sum of N20, 000 each to set up a business.

“In January, this year, the balance of N20,000 was paid to 160 beneficiaries and four additional persons were given N40,000 each, bringing the total beneficiaries to 164”, she said.

Mrs. Tinubu reported that the bank account of each of the 26 beneficiaries under the ongoing Post-Secondary School Scholarship (PSSS) was credited with the annual sum of N100, 000 on November 1, 2013.

She explained further: “Under our Good Boys’ Programme, my intention was to empower 80 of our young men who are at the crossroad of life. On Monday, July 22, 2013, we empowered 43 of the Good Boys in the Lagos Central Senatorial District to enable them have a steady source of income through various commercial activities”.

The senator also extended her kind gesture to another 37 of the Good Boys and Girls yesterday when they received financial assistance to enable them start a new lease of life as gainfully self-employed persons.

She told the audience that “constituency projects that I attracted to this senatorial district are ongoing, although I have drawn attention to the delays at the Drug Rehabilitation Centre in Gedegede and the ultramodern market project in Oke-Ira.