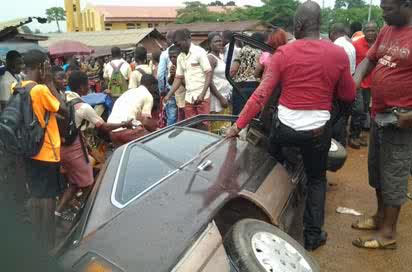 Umuokpu Junction along the old Onitsha-Enugu road in Awka, Anambra State was the scene of a horrific accident yesterday, that claimed the lives of seven students of Community Secondary School, Umuokpu and Union Secondary School, Amawbia.

A Toyota Camry car had lost control and ran into about 30 students of both schools waiting for vehicles to take them home. Seven of them were killed instantly and ten others severely injured.

The injured were badly hit that they had their limbs or arms severed.

An old man also had his right leg broken and his right eyes cut open.

One of the victims, most of who were returning to Awka, about five kilometres away, was trapped under a commercial bus that tried to avoid colliding with the Toyota Camry.

Several women displaying their wares beside the road were also injured.

The driver of the Toyota Camry, who was also injured was scene boarding a vehicle to Awka.

Men of the Federal Road Safety Commission, FRSC, arrived the scene 20 minutes after the victims had been taken to nearby Enugwu-Ukwu General Hospital.

Members of FRSC, however, towed the Toyota car away.

The Anambra State Sector Commander of the FRSC, Mr. Hyginus Omeje said he was waiting for his men who were on the spot to brief him on the accident.