Pandemonium broke out early hours Sunday when Boko Haram militants detained at the State Security Services facility in Abuja took over the complex for over six hours after disarming SSS agents guarding the facility. 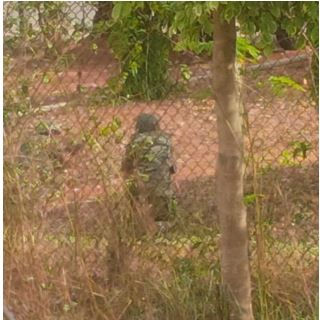 It was gathered that the audacious action of the detainees led to  prolonged negotiations that later resulted to shootings at the complex for over 4 hours, an SSS sources told newsmen.

The gunfight at the complex known as “Yellow House” caused panic in Abuja as the complex sits close to the Presidential Villa and one of the most fortified area in the national capital.

Below are some of the photos taken today during and after inmates at the State Security Services overpowered operatives of the agency and staged a jailbreak:

No fewer than 18 suspects were reported to be killed in the ensuing battle while about 20 were re-arrested with two rifle recovered from them. Two SSS operatives were also said to have been critically injured.