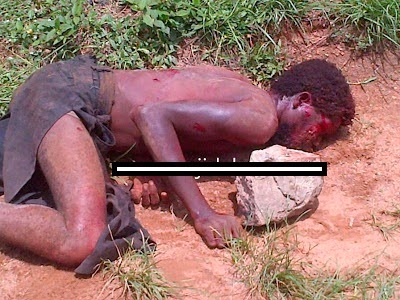 It seems God is out to expose evil doers in the ancient city of Ibadan, Oyo state.
Just  less than a week after the Soka Ritual Factory was discovered, two ritualists have been discovered, in different areas in the same Ibadan.
A source who was present at the first location where the ritualist was paraded took the pic above and those after the cut. He also explained how the young man, yet to be identified met his water-loo.
The photos after the cut are very graphic, Viewer discretion is highly advised. According to the ireporter, the incident happened at Adebayo Hospital Road, off Ring Road, Ibadan.
The young man in question is said to have paraded the area for sometime now as a mad man, and was well known. However, his cover blew when a resident noticed an expensive blackberry phone with him, and raised alarm, indicating that there was more to the mentally deranged man than meets the eye.
As a result, residents apprehended the young man in question. He was searched and an ID card, identifying him as a student of Olabisi Onabanjo University was found on him. What raised more suspicion however was that he had with him two expensive blackberry phones, and another expensive phone. They also found with him a list, which after been tortured he confessed were his clients whom he sold human parts to.
As expected the crowd descended mercilessly on him. He was about to be set ablaze when the police arrived and took him away.
See more photos below: 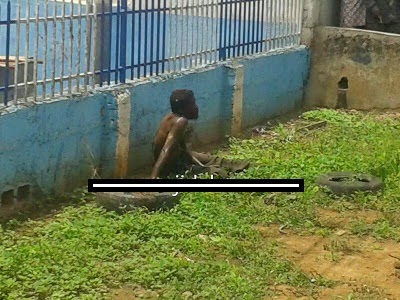 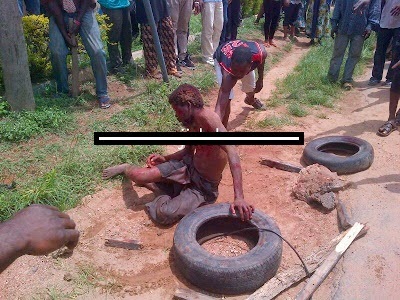 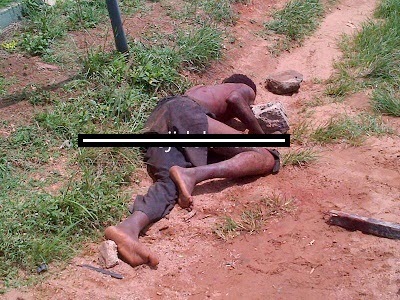 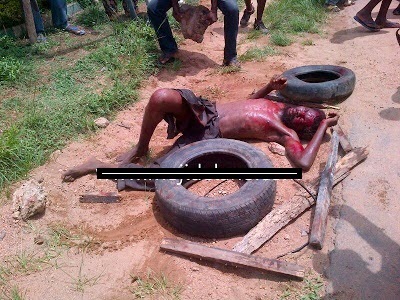 The incident happened around noon , and the man was taken away about an hour later. However, MDB had been recently informed that the young man eventually gave up the ghost and didn’t survive the lynching. Similarly, another ritualist was paraded at Oni and sons road also along ring road in the same Ibadan, today. He is said to have been found with a human tongue, but MBD’s reporter was not present at the scene, and little is know of the ritualist’s fate at the moment.
Also, residents of Challenge-Iwo Road axis woke up to the headless body of a young man dumped by the roadside. A small riot is said to have ensued afterwards as youths took to the streets to protest the ritual killings reported in Ibadan in the last one week. Security personnel were however dispatched to the area after reports got to the governor of the state, Gov. Ajimobi, and calm was restored.
Photo below: 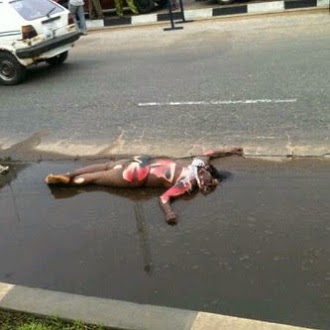