The Lagos state office of the Central Bank of Nigeria was set on fire on Tuesday and assets worth millions of Naira were destroyed. 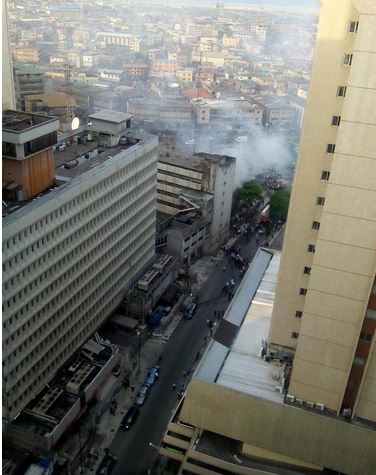 It was learnt, the fire started at about 5:40 PM at the old building as workers were preparing to move documents and other sensitive items from the block into their newly constructed head office annex.

Men of the Lagos Fire Service and other emergency agency officials are said to have arrived the scene.

Director of Lagos State Fire Service, Mr. Rasak Fadipe, said the fire service got an emergency call that the CBN building was on fire around 5:45 pm. He said two fire trucks were mobilised from the Onikan and Sari-Iganmu Fire Stations each carrying 10,000 litres of water to quell the fire.

Fadipe added that aerial ladder was being used to fight the fire as the complex is a high rise building, adding that the fire started on the third floor of the building. He further said that the place had been condoned off to allow fire fighters to do their job.

Policemen from Lion Building, Lagos were angry with journalists covering the incident and pounced on some photographers and in the process damaged and seized cameras belonging to them.

Analysts say they would not be surprised if the fire was meant to get rid of certain key documents that could serve as evidence in these investigations.

The apex bank spokesman assured the general public that vital records of the bank remained intact as the bank has effective backup system in case of any damages or loss of basic data.