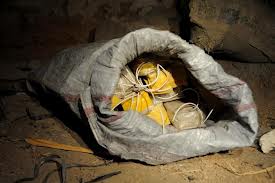 The Kaduna State Police Command on Tuesday averted what could have been a bloody tragedy as its bomb disposal unit successfully demobilised an explosive suspected to be bomb in Kaduna.

The State Police Public Relations Officer, Aminu Lawan, who announced this to newsmen in Kaduna, said that the Improvised Explosive Device (IED) was detonated at about 10:30 a.m.

It was learnt that a young motorcyclist dropped the polythene bag containing the IED at along the ever-busy Kashim Ibrahim Road, along Sultan Road, Ungwan Sarki, Kaduna North Local Government Area.

The police image maker said soon as the command received information of the suspicious package at about 10:00 a.m. the anti-bomb squad acted swiftly and was able to detonate the explosive safely “without causing any harm or injury to any person”.

According to him: “When we were alerted, we swiftly moved to the scene and condoned off the area. We called our anti bomb disposal experts and they responded promptly and discovered that what was contained in the polythene bag is an IED.

“They were able to demobilise the IED safely without anybody being affected”.

Lawan said that calm had returned to the metropolis after the scare, adding that normal activities had also resumed in the area.

He said that the initial assessment of anti-bomb experts of the IED was that it was of “high calibre”.

The police spokesperson advised people in the state to remain calm and assured them that the command had intensified patrol in all parts of the city to ensure that the suspects were tracked down.