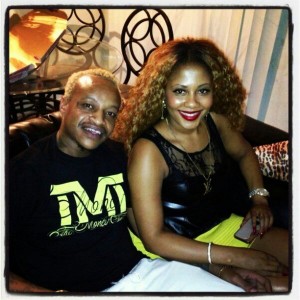 Reports say that Prezzo has been dumped by his Tanzanian girlfriend — Chagga, following some melodrama on social media.

A few weeks ago, the Kenyan rapper’s girlfriend Chagga went on a rant on Instagram, claiming the star rapper begged her to buy him Giuseppe sneakers on his birthday.

Ranting on IG, Chagga wrote: ‘Why I have posted some of our chats here is because you have started sharing with your sisters, I will now send a voice note so guys can hear just how stupid you were’, she wrote in Swahili.‘A normal man doesn’t act like you do. So here you were flaunting yourself lol, you know, when I looked at you I was shocked and I said, this man with blonde hair like mine, what am I doing with him?’ Chagga has gone on to delete all photos of herself and Prezzo (and there were quite a lot) from her Instagram page.  Prezzo has also done same.

Days after the public breakup, Chagga is now claiming Prezzo infected her with a sexually transmitted disease while they were dating.

The Tanzanian socialite posted hospital results that came out positive for a sexually transmitted disease Pyelonephritis.

Prezzo has only responded with a tweet insinuating that he broke up with Chagga and not otherwise. “President” is like a drug (highly addictive) he’s the best up until the drugs runs out, withdrawal symptoms can be seen from miles! #Mswati,’ he tweeted.

Kenyan entertainment website Vibe Weekly reports that that Chagga edited out the parts in their conversations where she was begging Prezzo to take her back and ‘that there is even evidence out there that she claimed it was ‘Nyege’ (sexual desire) driving her up the wall and making her go crazy’.

The reports might be true as, a few days ago, Chagga talked about reconciling with the rapper. On Instagram, she wrote (in Swahili); ‘Let the movie continue #LoveIsBlind #ThereIsNoNgechuWithoutChaggaBarbie #GodKnowsWhy #IDon’tNeedAnyoneButHim #PleasePrayForUs #ThereIsNoEasyRelationshipOnEarth’. Prezzo hasn’t had it well with relationships in the last few years.

Before dating Chagga, the rapper was in a relationship with Kenyan bad girl Huddah Monroe. That didn’t end well too.