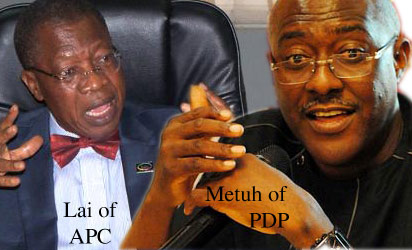 The All Progressives Congress (APC) has challenged the ruling Peoples Democratic Party, PDP, to urgently reveal to the Nigerian public any evidence of the opposition’s alleged involvement in the Boko Haram insurgency that is currently ravaging some parts of the North or forever keep quiet.

The spokesperson of PDP, Olisa Metuh on Thursday said the party had evidence of meetings held by unnamed members of APC outside the shores of the country in pursuit of what he termed the “ignoble objective” of planning to use Boko Haram to unleash unprecedented mayhem when the opposition party loses the 2015 general elections and forcefully take over power.

But APC in a statement signed by its Interim National Publicity Secretary, Alhaji Lai Mohammed in Lagos on Friday, said: “We have absolutely no hand in this insurgency, and we dare anyone with contrary information to publish such today. It is trite that he who alleges must prove”.

It said that In the absence of any evidence, Nigerians will have no choice but to come to the realization that the relentless finger-pointing by the PDP/Presidency is a ploy to divert attention from those who are actually behind this insurgency, those who see it as a trump card to 2015 and those who have been benefitting massively from the huge funds being allocated to security.

APC said the latest accusation by the PDP is being made within the framework of its plan to implicate the opposition and clamp down on its leaders ahead of the 2015 general elections, having realized that it (PDP) cannot possibly win the 2015 elections due to its appalling record of failure.

“Otherwise, how can the PDP-led federal government claim to have ‘evidence of meetings held outside the shores of the country’ to violently overthrow the government of President Jonathan, and yet refuse to make such evidence public or arrest and try those involved? Or is it only the riotous spokesman of the ruling party who has the evidence?” the party queried.

It also lampooned the ruling PDP for suffering from selective amnesia by its warped interpretation of APC’s statement, which pointed out to the ruling party that President Jonathan is not the first minority Nigerian leader, hence the people should be spared the boring reference to his ethnic origin.

“It is a reflection of PDP’s diabolical mind that it only picked out the former minority leaders who are soldiers and left out the name of a former civilian leader. We mentioned three former leaders who are of minority ethnic stock: Tafawa Balewa (Sayewa), Yakubu Gowon (Angas) and Sani Abacha (Kanuri).

“Curiously but not unfathomably, the PDP dropped the name of Balewa and then extrapolated from the fact that we mentioned two former military leaders that we are comparing a democratically-elected President with defunct military dictatorships. This can only be the product of a contorted mind. Good a thing, Nigerians understand better and will not be fooled by such a sickening stretch!” APC said.

The party reiterated its earlier statement that the only reason the Boko Haram menace has persisted for long is as a result of the incompetence, cluelessness, inferiority complex and collusion of the presidency.

“First, we heard from no other personality than President Jonathan himself that his cabinet is infested with Boko Haram. Then the PDP started pointing fingers at some imaginary opposition leaders as being behind the insurgency, and now the President has openly admitted his own incompetence by saying his administration has been treating terrorism with kid gloves.

APC said in order to drive the point deep into the thick skull of those at the helm, it hereby restates its earlier recommendations on how best to tackle the insurgency: Develop a discernible counter-terrorism strategy that will clearly identify the multiple means for preventing, responding and defeating terrorist groups, including the alignment of political, military, social and economic instruments and objectives; improve intelligence gathering; de-radicalize the affected areas; and invest in research that will give more insight into the different aspects of Boko Haram, including its ideology, leadership structure, profile of members, internal organization, sources of funding and weapons and links to diaspora.

Other recommendations according to APC “are the need to widen the scope of our response to include the sub-regional bloc ECOWAS and the continental body African Union, especially since Boko Haram has assumed a regional dimension; the need for a Marshall Plan of sorts for the North-east, not the paltry 2 billion Naira which the FG provided as recovery fund to the six North-east states, at least four of which are worse-hit by the insurgency; an end to inter-agency rivalries that have weakened the fight against the terrorists, and the need to lift the morale of our gallant men and women in uniform who are battling the insurgency, instead of the huge funds allocated for the purpose of upgrading their equipment being guzzled by thieves”.