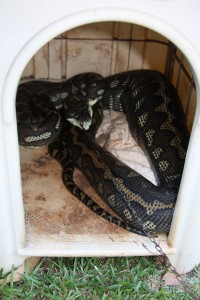 The Sydney Morning Herald reports that a “possum-sized” dog tied up in a Caniaba, New South Wales backyard was eaten by a python earlier this week.

When the owner went into her yard to untie the Chihuahua-Maltese cross on Thursday morning, she got a horrible shock: A huge carpeted python with a bulge in its body and the dog’s chain coming out of its mouth.

Sue Ulyatt, a volunteer with the nonprofit Wildlife Information, Rescue and Education Service (WIRES) told the newspaper that the huge snake, which is estimated to be 50 years old, swallowed the pet whole.

“Because the dog was chained up it couldn’t get away. It was also a very small dog, which is why this happened,” Ulyatt told the Daily Mercury.

Photos shared by WIRES on Facebook show the large reptile with the dog’s chain still in it’s mouth.

As of March 14, the photos were removed. The nonprofit explained why in a follow-up post.

Due to reasons beyond our control, we have been told to remove the post, as it is considered by the powers that be, as offensive and too graphic for public viewing, from our point of view it is the reality of wildlife rescue and rehabilitation.

While she was understandably upset, the dog’s owner understood that the python saw her pet only as food. She’d tied up the dog to prevent it from running loose and harming wildlife, according to Ulyatt.

Despite initial concerns that the snake would have to undergo surgery to remove the chain, officials said the python is doing fine.

“He’s a very happy snake,” Michael Pyne, senior veterinarian at the Currumbin Wildlife Sanctuary, told the Daily Mercury. “The chain will stay in until the snake has digested it all. We have to let the food dissolve… It’s just a waiting game. We’ll let him digest it.”

Once the python recovers, it will be released back into the wild.