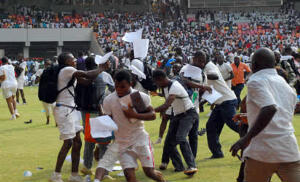 The House of  Representatives, yesterday, resolved to probe the circumstances surrounding the death of 21 job applicants  during last Saturday aptitude test for recruitment into the Nigeria Immigration Service, NIS.

It also resolved that families of the victims should be given automatic employment, provided they were qualified.

The House also mandated its Committee on National Security and Public Safety to investigate last Saturday’s killings of over 100 residents in a Southern Kaduna village, directing the committee in plenary to carry out the assignment within two weeks and report back.

Four committees, including those on Interior, Justice, Public Service Matters and Labour and Productivity, were mandated to investigate the matter and report to the House within four weeks.

This development was sequel to a motion brought to the floor of the House by Sunday Karimi, PDP, Kogi State, under matters of national importance.

In the motion, entitled, ‘Tragedy at 2014 immigration exercise in which one million  Nigerian youths scrambled for 4,500 job placements,’ Karimi had given a graphic detail with figures of how the aptitude test was conducted in almost all the state capitals.

“On March 15, 2014, over one million Nigerian youths trooped into all the nation’s state capitals and other major cities to participate in the 2014 Nigerian Immigration Service recruitment, for which the Service had in September, 2013, advertised positions into it and had obtained N1000 as application fee from each of the applicants,” he said.

He explained that in Lagos alone, about 70,000 youths showed up at the stadium for the test, adding that in Ibadan, the Liberty Stadium played host to about 20,000.

According to him, .the 60,000 capacity National Stadium in Abuja was over-crowded with 70,000 youths, while 25,000 candidates showed up like a sea of heads at llorin Stadium in Kwara State.

Karimi said:  “In Benin, at the Samuel Ogbemudia Stadium, 26,000 youths trooped in all in a bid to write the aptitude test.

”Despite the crises and insecurity in the North East, Gombe and Borno State played host to about 5,000 applicants each, while in Sokoto State, 10,000 applicants participated in the exercise.

”This resulted in chaos and stampede in all the centres and several persons were reported dead and many more critically injured. At least, about 21 deaths were reported.

”In Benin, three pregnant women lost their lives;  in Abuja, eight candidates, including two men and six women, died at the venue.

“In Port Harcourt,  five corpses, including that of a pregnant woman, were recovered at the scene. In Calabar, Ogun, Lagos and at many other centres, candidates, all in a bid to secure a white collar job, were flogged and abused by security personnel. Many slept at the venues, a night preceding the exercise.

”An unrecorded number of Nigerians had lost their lives in motor accidents on their way to the test centres.

“The National Bureau of Statistics ,NBS, states that 54 per cent of Nigerian youths are unemployed and puts Nigeria’s total unemployment at 23.9 per cent.

Karimi had in his motion, prayed the House to condemn unequivocally, handling of the recruitment of the Nigerian Immigration Service of March 15, 2014, and commiserate with the families of applicants who lost their lives and also empathise with those who suffered injuries as a result of the exercise.

He also said the Comptroller General of the Immigration Service and the Minister of Interior must appear before the House to explain the unwieldy recruitment of March 15, 2014, adding that the Federal Government should work in conjunction with state, local governments and public spirited individuals and organisations to evolve a job creation scheme that would best address the unemployment situation in Nigeria.

He canvassed a micro-credit scheme, Nigerian Youth Empowerment Programme, to assist Nigerian youths keenly interested in handcraft and small businesses, in order to, at least, immortalise those who lost their lives.

The  Speaker, Aminu Tambuwal, at this juncture, called for debates on the issue, but members sought an amendment that the Committee on Human Rights should be dropped for Labour and Productivity and this was carried.