The continued increase of beer parlours, popular called joints, in Lagos metropolis has been generating concerns from residents in the state. 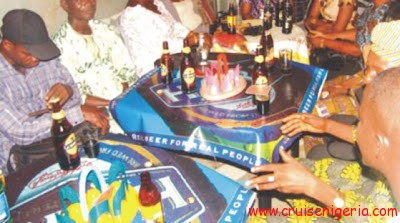 While some people complain about the environment hazards these bars pose to residents as a result of the noise coming out of them, others say these joints serve as meeting points for criminals.

Hence, the increase in crime rate in the society.

According to a report made public recently, it was revealed that out of every ten beer parlours, about six would serve as a converging point for criminals.

To buttress this assertion, not too long ago, one Ilori Hamzat was found dead inside his car parked in front of a beer parlour in Ipaja, Lagos.

A resident in the area where this gruesome incident happened explained that: “the deceased had spent the previous evening at the same beer parlour in front of which he was found.

“The night when this incident occurs, some strange faces came into the bar and while they were drinking they silently discuss.

“Ilori approached them in his drunken state and called them armed robbers and while he was shouting ‘thieves, thieves’, one of them pulled out a gun and shoot in the air.

“Everyone inside the bar took to their heels and the unknown men took Ilori away with them as they drove out of the place.

“It was later in the morning that we found the victim dead inside his car in front of the beer parlour.”

Commenting on the security challenges beer parlours pose to people living in the area they are situated, Mr Daniel Etuk, an investigative journalist, noted that most criminal incidents that involve robbery, kidnap, and rape usually happen within the radar of beer parlours.

He added that the bar attendants, customers and those who live around these joints are potential victims.

His assertion could be corroborated with a kidnap incident that happened in Bariga area of Lagos recently.

Mr Idara Etiebe, a resident in Bariga who witnessed the incident, narrated what happened on that fateful Tuesday morning.

He said: “On Tuesday 25 March, I was woken up by a loud noise of a lady screaming for help across the street.

“The noise grew so intense and suddenly, it went silent. When I set out for work around 5:30 am, I saw a lady’s bag on the street. I took the picture of it with my phone and reported the case to the police.

“After the police did their investigations, it was discovered that the owner of the bag was an attendant at a bar in my area and she was said to be missing.

“When the criminals were eventually apprehended, it was discovered that they were actually regular costumers at the bar where the missing lady works.”

Operators of beer parlours have always refused to agree that their business places serve as safe haven for criminals.

They claim beer parlours are social places for the public to meet and relax after a day’s work.

Chibuike Onali, a bar attender, stated that the beer parlours are not created for criminals but for everyone in the community to converge and enjoy themselves.

“We cannot say who should and who should not patronize us because our product is for the people.

“We however, try as much as possible to make sure unknown costumers with suspicious characters don’t use our bars as a meeting place for their evil acts,” He argued.

When asked if he has ever contacted the police whenever he notices unknown people holding meetings at his bar, he said:  “It is the responsibility of the Nigeria Police to make sure criminals don’t have safe haven in the community.”