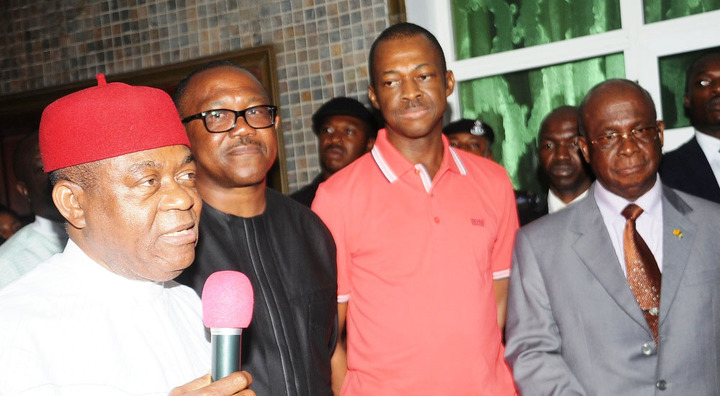 Governors of the five South-East states have condemned last Thursday’s attack on the convoy of the Senate President, David Mark in Imo State, describing same as a wicked act.

Information Nigeria reported that the convoy of the advance team of Senator Mark, which was on its way to the burial ceremony of late business mogul, Sir John Richard Anyaehie in Nkwerre, was attacked by gunmen in Orlu area of Imo State.

The governors, who made their position known under the platform of South-East Governors Forum, also described the attack as “unfortunate”, adding that they received the news with shock, and it was unfortunate that it happened in their zone.

They called on the security agencies to ensure that the perpetrators are brought to book.

Chairman of the Forum and Governor of Abia State, Theodore Orji, in his reaction to the attack, said that it was an intolerable act.

The forum dismissed the attack as the handiwork of Boko Haram insurgents, noting that it could be political, even though it could not point at any particular direction, calling on security agencies to sit up and conduct thorough investigation into the incident and apprehend the culprits.

Speaking in Umuahia, the Abia State capital weekend, Governor Orji said the attack calls for vigilance, adding that it was an eye-opener of what could happen between now and 2015 general elections.

“I received the information with shock. It is unfortunate and I want to encourage the Senate President that he should not be deterred.

“It is unfortunate that this type of thing is happening in our zone and we entirely condemn the act. It is a wicked act that cannot be tolerated and I hereby, call on security agencies to sit up and investigate this with a view to apprehending the culprits and bring them to book.

“But these people should realise that they don’t have monopoly of violence. Every person should be a disciplined citizen. You don’t just intimidate people by being a criminal; and this is an eye-opener to many people of what is going to happen between now and 2015.