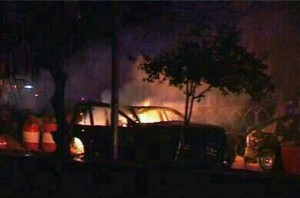 Three soldiers were killed when a suicide bomber detonated a car bomb at a Lebanese army checkpoint in the border town of Arsal, a security official said.

The Lebanese army said in a statement that four other soldiers were wounded in Saturday’s attack on the checkpoint at Aqabet al-Jurd in the Arsal area.

The attack was claimed on Twitter by a group calling itself Liwa Ahrar al-Sunna in Baalbek, Arabic for the Brigades of the free Sunni Muslims.

It said the attack was to avenge the death of Sami al-Atrash, a suspect wanted in connection with car bombings targeting Lebanon’s Shia armed group Hezbollah.

Atrash was killed on Thursday in a shoot-out with the army.

The army had described Atrash as a “dangerous terrorist” who was tracked down to a hideout in Arsal, where he was killed.

Arsal is home to thousands of Syrian refugees but also Syrian rebels and their Lebanese allies who have fled a Syrian army advance on the Syrian side of the border.

Lebanese Sunni fighters accuse the Lebanese army of conspiring with forces loyal to President Bashar al-Assad and the Lebanese Shia group Hezbollah, which has sent fighters into Syria to support Assad fight a Sunni-led revolt.

The attack hit just hours after a speech by Hezbollah leader Hassan Nasrallah, who said he was protecting Lebanon by fighting in Syria against Sunni fighters.