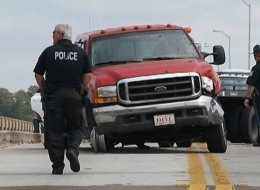 A runaway Florida teen allegedly went for “one heck of a joyride.”

The 16-year-old Arcadia teen is accused of stealing a truck and causing at least 23 crashes on Tuesday, according to WFLA.

The Manatee County Sheriff’s Office said the teen was riding his bicycle when he spotted the Ford F350 sitting in an auto shop with the keys in the ignition. That’s when police said the teen stole the truck and started out on his path of destruction.

“We haven’t really interviewed him yet to find out why,” spokesman for the department Dave Bristow told the station. “I mean obviously he wanted to go on a joyride, but that was one heck of a joyride.”

As police attempted to chase the suspect, they said the teen managed to damage 23 cars — nine of them on a congested bridge — before finally being apprehended. At one point, the chase had to be called off due to unsafe conditions as the vehicle veered into oncoming traffic, and a police helicopter was called to keep surveillance, according to the Bradenton Herald.

No serious injuries were reported in the crashes.

“I saw a red pickup coming down the middle of a two-lane bridge, and cars were going off on either side,” Terry Farren, whose vehicle was struck by the teen, told WFLA. “I tried to get off as far as I could, but couldn’t, and he got the rear end of my car.”

A witness to the scenes of destruction, 21-year-old Erin Mulrine, told the Herald the teen appeared to be doing at least 100 mph at some points.

“He was flying…I have never seen anyone go that fast on that road,” Mulrine said.

The teen was arrested and now faces charges including grand theft auto, reckless driving, and fleeing the scene of multiple accidents, among other counts, according to The Palm Beach Post.