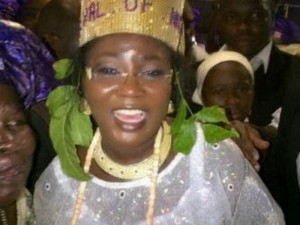 The President-General of Association of Market Women and Men in Nigeria, Mrs. Folashade Tinubu-Ojo, weekend, denied demanding a bribe of N20 million from a set of traders in the state.

Tinubu-Ojo, daughter of All Progressives Congress (APC) National Leader, Asiwaju Bola Tinubu also dismissed claims from some quarters that she directed traders in different markets in the state to duly register with the APC or lose their shops.

She made the denial at a session with journalists in Alausa, Ikeja following the allegations from some quarters that she asked some traders, whose shops were shut recently at the Abibatu Mogaji Model Market in Iponri for flouting the extant rules of the market, to pay a sum of money ranging from N5 million to N20 million.

Speaking at the conference alongside the outgoing Secretary-General of Abibat Mogaji Model Market, Mrs. Adeyinka Koiki, Tinubu-Ojo said there had been controversies over why the market was shut on February 8 by the state market board. But the market was reopened on February 17.

She debunked all allegations of demanding fees from the traders before or after shutting the market, saying the closure of the market was in line with the constitution of the Association of Market Women and Men.

Tinubu-Ojo said there was no way she could have decided to shut the market in order to coerce traders to register as APC members considering that traders in the market have a choice on which party to vote for.

She lamented that her actions was being politicised, noting that she was only playing her roles as market leader in the state and not as a daughter of APC National Leader, Asiwaju Tinubu.

Tinubu-Ojo has been criticised by many since she was made the market leader, as she was alleged to have been imposed on the association by Asiwaju Tinubu whose late mother, Abibatu Mogaji was Tinubu-Ojo’s predecessor.