#TCRadio is a programme to sensitize the populace on the dangers of smoking and the need to support the TobaccoCtrl campaign and is on the following radio stations: Nigeria Info, Wazobia FM, Beat FM, Inspiration FM and HOT FM (Abuja).

To participate in the #TCRadio campaign, Text (TC Name Email Location Message) to 39405. E.g  (TC Peter Paul [email protected], Lagos I want to be part of the TC Radio Campaign). To 39405

A coalition of civil groups; Civil Society Legislative Advocacy Centre (CISLAC), Environmental Rights Action/Friends of the Earth Nigeria (ERA/FoEN) and the Nigeria Tobacco Control Alliance (NTCA), who are collectively advocating for the speedy re-passage of the National Tobacco Control Bill (NTCB) by the National Assembly, have sent a letter to His Excellency, President Goodluck Jonathan, to intervene and give the needed push, for the bill to become law.

In the letter, the coalition decried the snail speed at which the bill is moving at the National Assembly. They further urged the President that since Nigeria is a signatory to the World Health Organization’s Framework Convention on Tobacco Control (WHO-FCTC) in 2004 and 2005, respectively; and stated that “it will be a high point of his tenure if this bill is eventually made law.”

The letter stated that the importance of this bill cannot be over-emphasized, as it will go a long way in ensuring a healthy society and protecting generations unborn. 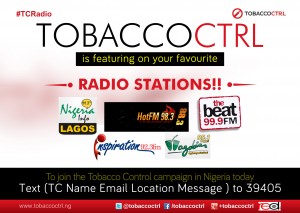 If you would like more information about this campaign, please visit

Tobacco Control Nigeria (Tobaccoctrl) is a policy change and public health campaign project using Social Media to advance tobacco control and support the passage of a comprehensive Tobacco Control (TC) law compliant with the World Health Organization’s Framework Convention on Tobacco Control (FCTC). The campaign is to raise awareness of the various health risks of smoking and second hand smoke, as well as the toll of tobacco se on the Nigerian population. It also aims to encourage online and mobile followers to express their wish for a healthy environment enabled by effective TC policies for themselves, their families, and their communities.

Red Communication is a PR & Communication firm under the parent company, RED. An innovative media group focused on Africa, RED’s vision is to excite and empower an evolving generation through the media’s limitless possibilities. Built across tools and platforms, its Communication Division holds Red Communication, Red Marketing and Small & Medium, and YouthConnect; and its Content Division holds the Y! brands, including Y! TV, Y! Magazine, YNaija.com, Teen Y!, Y! 2015, the Y! Tech 100 and the Y! Annual Black Ball/Y! 100 Most Influential List. It also anchors a development firm, The Future Project Africa, which co-presents Africa’s leading youth platform, The Future Awards Africa, and other projects including the Nigeria Symposium for Young & Emerging Leaders and The Future Enterprise Support Scheme.