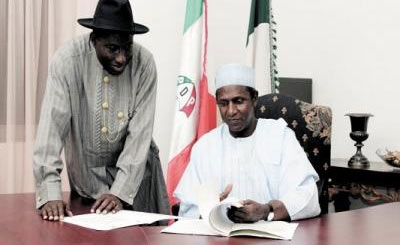 President Goodluck Jonathan has paid glowing tributes to his late boss, President Umaru Musa Yar’Adua, saying that if not for the good role played by Yar’Adua in his political career, he might have remained as governor of Bayelsa State.

The president spoke in Katsina on Thursday night during the state banquet organized in his honour by the Katsina State Government.

Without the late president, Jonathan went further to say that he might have not become Nigeria’s president today.

He said: “My visits to Katsina are always a kind of homecoming. As you all know, without the role played by your great son of blessed memory, President Umaru Musa Yar’Adua in my political career, I would probably still be in Yenagoa as Governor of Bayelsa State.

“Without him, I probably wouldn’t have been President of Nigeria today. He was a very good boss. He was honest, forthright, and patriotic. He had a great vision for Nigeria and set out to do things in a different and original manner. We all take consolation in the fact that he gave his best during the short period that he served our country.

“If he were here today, I have no doubts that he would be impressed with the visible transformation that is taking place throughout the length and breadth of this state. Governor Shema and his able team deserve commendation not only for initiating new projects, but also for ensuring the completion of all the projects initiated by our late beloved President Umaru Yar’Adua who by providence was his, and also my own predecessor in office”, He added

Commending his host, the governor of Katsina state, Jonathan said: “Since our arrival this morning, we have gone round parts of the state to inspect and commission projects; and the projects that I have seen, are quite inspiring and highly commendable. They confirm what well-meaning indigenes of the State have often told me about the government’s commitment to improving the welfare of the people.

“Let me use this unique opportunity to specially commend Governor Ibrahim Shema, for the outstanding work that he is doing. He has shown with his commitment, that what matters most in governance are the people, not politics. By justifying the trust that the people have reposed in him, he has also made the Peoples Democratic Party, our great party which he once served as Deputy National Chairman, very proud indeed”.

He extended his condolences to the government and people of Katsina State and the families that lost loved ones in the recent attacks on innocent villagers in Faskari and Sabuwa local government areas, which left over 60 persons dead.