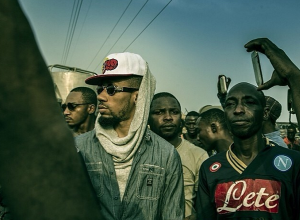 In addition to being a brilliant singer, TY Bello is also a photographer, and her skill in picture taking has won her several laurels including a recent appointment as the official photographer to the President of the Federal Republic of Nigeria.

However, the singer who has been off the music scene for quite a while is back in the news again; not because of a new release but on the subject of her second love which is photography.

Rapper Phyno recently became the focus of TY Bello’s camera lens as she followed the Igbo Rapper through the streets of his hometown in a series of gritty, iconic shots .

In some of the pictures which were released this week, we see as TY Bello captures Phyno on the streets, in an abandoned spare part shop, and beneath massive powerlines portraying Phyno in moments of personal reflection in public places which we believe are meant to be symbolic of Phyno’s personal journey and eventual rise to popularity under heavy public adulation and scrutiny.

TY Bello’s past photographic subjects include some of the most notables names in Nigerian social and artistic circles, the first lady Patience Jonathan and Professor Wole Soyinka, to mention just a few.

Enjoy the collage below: –