From ages, the issue of abortion has generated divergent views from different people across the world. And it seems this controversy is not precluded from the religious circle. 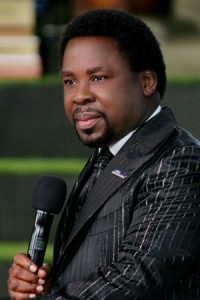 According to internationally famous Nigerian prophet T.B. Joshua, anyone who commits an abortion after a rape incident has committed a double sin.

The cleric, who made this known during a Questions and Answers session with his followers on Facebook recently, believes one should accept his or her fate no matter the situation he or she finds himself or herself.

See his full answer below:

Pastor T.B. Joshua is respected both by Nigerian and foreign politicians and celebrities. Among his latest predictions is the unfortunate disappearance of Malaysian plane.

Only some weeks back, Pastor ChrisOyakhilome had said it is not an easy decision to make on whether or not to keep a pregnancy that results from a rape incident, saying that only victims know what they are going through.

In order to buttress his point, the respected cleric said there is no where in the Bible that is mentioned to keep a child from a woman who was raped. 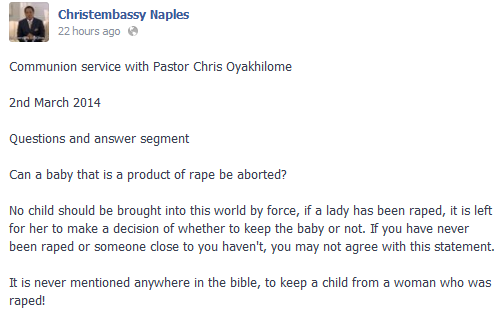 The question now is whom to agree with. Is it Pastor Chris or TB Joshua?