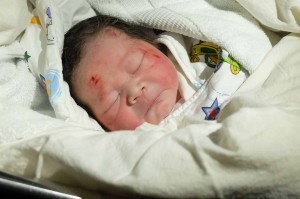 An unborn baby has survived a fatal car accident that killed both mother and father.
The incredible child catapulted three metres out of his pregnant mum’s womb after she was run over by a truck.
Heavily pregnant Wang Zhau was being taken to hospital by her husband Mao when the tragic accident happened.
According to police reports, the motorbike driven by the couple had been hit by a truck causing both parents to fall off. The wheels of the truck then ran over the woman, who died instantly and causing fatal injuries to the father.
The baby named as Xiao Zhao catapulted landed three meters away from his mother, suffered from minor bruises is doing well now.

Eye witnesses claimed that when the woman was hit by the truck she gave birth on the spot. Others said that the baby, which was healthy 4.2 kg, had been thrown out of the woman’s belly and had landed three meters away.

The woman’s family revealed that a 40-year-old Wang Zhau had gone into labour at 8:30am and her husband, a 42-year-old man Mao Wang decided to take her by motorbike to the hospital rather than waiting for an ambulance.

Police confirmed the arrest of a truck driver and his incarceration while the accident is investigated.

The shocking incident has apparently been front page news in China, and has seen people come to bring presents and donations for the newly-orphaned child.
The baby boy is said to be doing well in hospital and is expected tomake a full recovery from the minor bruises he suffered in the accident.