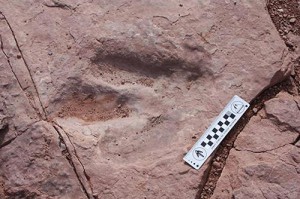 A Utah man has been indicted on federal charges of stealing a fossilized dinosaur footprint from the Jurassic period.

The U.S. attorney’s office in Utah announced Wednesday that a grand jury returned the indictment against 35-year-old Jared Ehlers of Moab. He is facing up to 20 years in prison on the most serious of four counts.

Authorities in southeast Utah say the three-toed ancient track was pried last month from the sandstone on the Hell’s Revenge Trail in the Sand Flats Recreation Area near Moab.

Messages at Ehlers’ house were not immediately returned. It’s unknown if he has an attorney yet.

Utah Bureau of Land Management District paleontologist Rebecca Hunt-Foster says the dinosaur tracks are 190 million years old. She says they are one-of-a-kind tracks that don’t have a price.