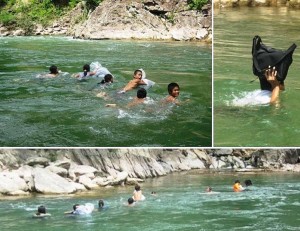 And you thought the school bus was bad.

To get to school every day, children from the Sam Lang Village in the Na Hy Commune, located in Vietnam’s mountainous northern Dien Bien province, have to first cross the Nam Po River. In the dry season, a small bridge is sufficient for the job. But during the rainy season, when the bridge isn’t available, the kids apparently rely on a different method entirely: plastic bags.

Here’s how it goes, as documented in a cell phone video shot last year and obtained by Vietnam’s Tuoi Tre News: Upon reaching the river, one child at a time climbs into a large plastic bag, then has the top of the bag swirled shut over their head. A village strongman grabs the top of the bag in one hand, then, using his other hand, swims across the river to the far bank, bag in tow, ending up downstream on account of the fast-moving current.

Once there, the bag is opened, and the child, whose school clothes are presumably still dry, proceeds on. Villagers repeat the process until everyone has crossed.

Minh, 23, told Thanh Nien News that she relies on the bag method to get to work. She described her first crossing, made last September, as “shaky and scary.”

“I did not dare open my eyes,” she added. “Only when he said ‘arrived’ did I believe that I was still alive.”

According to Viet Nam News, the country’s Minister of Transport, Dinh La Thang, responded to the video by pledging to build a bridge across the river, at a cost of $166,000. More than 50 rivers in the province are reportedly in need of bridges, at an estimated total cost of $9.5 million.

The BBC reports nine people died in February of this year and many more were injured after a suspension bridge in the country’s Lai Chau Province collapsed.