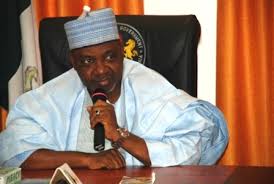 A civil rights organisation, Ijaw Monitoring Group, has faulted the directive by the Senate that the Chief of Army Staff, Lt-Gen. Kenneth Minimah should relocate to Borno State.

The IMG stated that instead of the COAS, the Senate should be recommending the relocation of Vice-President Namadi Sambo to Maiduguri, the hotbed of Boko Haram activities.

The National Coordinator of IMG, Mr. Joseph Evah, in a telephone interview with SUNDAY PUNCH, explained that such a directive should not have come at a time when many school children were massacred by members of the Boko Haram Islamic sect in Yobe State.

He said, “I am disappointed that the Senate would be asking the Chief of Army Staff to relocate to Borno State. It shows that they are incapable of handling the problems of Nigerians.

“If we have a responsible Senate, they would have asked the President to order Vice-President Namadi Sambo to relocate to Borno State.

“Students were killed in their schools, yet the Senate is coming out with a childish idea. Why can’t the Senate tell the Chief of Defence Staff, who coordinates other armed forces, to relocate?”

Evah said, “Jonathan relocated to Oporozza in Delta State where he met with Niger Delta governors and militants. The militants gave conditions, and the conditions were tabled before Yar’Adua. We are now telling Jonathan, “the way Yar’Adua sent you, you should also direct Namadi Sambo to go and meet Boko Haram.

“The way Jonathan entered into a canoe to meet the militants in the creeks, let Sambo climb a donkey or camel to Bauchi, Borno, or Kano State, along with the governors and political leaders in the North, to meet Boko Haram”.