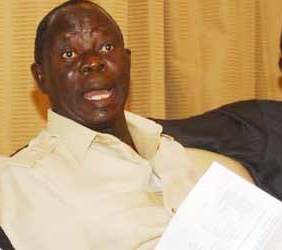 Edo State Governor, Comrade Adams Oshiomhole has called on Nigerians to join hands together in order to overcome the protracted security challenges confronting the country.

Speaking in Plateau State weekend, Oshiomhole said: “All of us as Nigerians have responsibility for the security of our country. We need to understand the seriousness of the issues. It is not about bulk-passing; as Nigerians we should be worrying about the fact that we have woken up and found our country confronted with something we have never imagined. We must unite in confronting the issues”.

The governor, who attended an interactive session of Course 36 of National Institute for Policy and Strategic Studies (NIPSS) Kuru, near Jos, said security issues were not a matter for careless talk, adding: “It is clear that the situation is beyond what we initially thought of. I am not here to blame anyone; it is a collective responsibility, we all have a responsibility for the security of our country”.

“For development to take place, we must have a coherent government policy. We need a more improved holistic approach over the issue”, he said.

He advised governments at all levels as well as privileged individuals and groups to invest heavily in education as the catalyst for national development.

“Those holidays are a creation of the elite class to appease the downtrodden. We need to change our attitude towards the use of our time to be able to come out of poverty. We spend much time on unnecessary holidays”, he added.