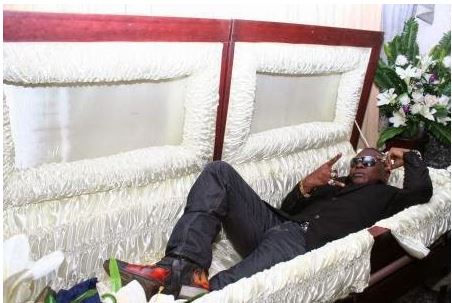 Before I was born, the universe came into existence with a big bang about some 4.6 billion years ago, our solar system formed. Life arose and lots of animals evolved. Somewhere on the continent of Africa, modern man arose, and spread across the other continents. Civilization blossomed, along with the domestication of animals, tools, technology, and information; I was oblivious to all of these events.

I didn’t exist yet, but everything that ever happened in the universe, happened – and it went by in an instant.  That “instant” spanned about 13 billion years.  It could have been even longer, it doesn’t matter, because to you and I, it was still an instant.  We have the luxury of science and history to tell us of our universal past, but without that, the only recollection we could possibly have of anything is what we actually lived through.
What’s the point?
The point is that when you die, it’s likely the same thing. The only difference is that there is no “instant” at the other end for you to suddenly become conscious, like birth.  Instead, time and events like the ones listed above will happen on their own, without you, just like they did before you were born.   Time will go on until the end of the Universe, if there is, but you won’t be able to know it
.
Should we be afraid of death?
I will freely admit that death itself does not scare me.  The physical act of dying terrifies me.  I don’t want it to be painful, and I don’t want it to be drawn out.  I want peace and tranquility, like any other normal person would want. Though I am not afraid of death, the thought of it saddens me.  I love life so much that it crushes me to think that I wouldn’t be able to spend time with family and friends.  Of course, losing a loved one is equally painful for the same reasons. It also saddens me that I wouldn’t witness the next great advances in technology.  Imagine the people of the 1800’s; they could never have imagined BlackBerry, IPad, Facebook, Skype, Email etc. I’m in my 60’s now; can you imagine what kind of technology the human race will discover in the next century?
Now to the Koko of this matter, this is not to rattle your belief in Heaven or Hell and life after death, but just to make you think. After all what do I know, even as I write this I maybe so high, but it is my opinion and not yours.
It would be reassuring to know that there was some sort of life after death, but simply put, there is no real evidence for this, no matter which religion is scrutinized.  In fact, it seems that people’s life after death experience is biological in nature.  After all, they can be simulated with drugs and put in a lab.  It also seems very anthropocentric to believe that we are so special that we deserve an afterlife.  There are all sorts of problems with life after death – based on religious views and different versions of “heaven” and “hell”;  the concept of the soul; the age of the person (for example: do one day old infants get life after death?); animals (do they get to experience it too?)
Some people would be asking by now, which one be all this grammar sef?
We have got one life to live on this planet, just one.  You should do everything in your power to enjoy it to the fullest, no slacking my guy and to make sure that everyone and everything around you has the same opportunity. So, what happens when you die? – I think the answer is mundane and simple, Nothing!
Advertisement