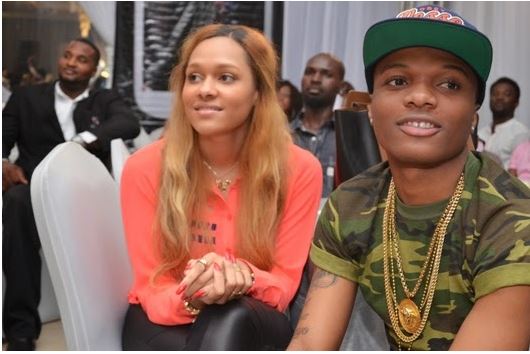 According to a Punch report, Wizkid and his longtime girlfriend, Tania Omotayo have parted ways.

Before now, sensational singer, Wizkid and his pretty babe, Tania Omotayo, used to be an item. But it seems things are no longer at ease between the young couple.

In fact, it looks like they have carried their ‘beef’ to the social media going by what they posted on their Instagram pages earlier in the week.

Tania had posted a picture with the caption, ‘just because you love somebody so much does not mean they are the right one for you.’

Soon after, the singer posted a picture where he itemised inscriptions, ‘single, married, in a relationship, it is complicated, in the studio.’ On the list, he marked ‘in the studio.’  In other words, telling his fans that he was neither single nor married and of course, not in any relationship.
For a while, there have been speculations that the couple were having problems as they have not been spotted together at events as frequently as they used to. Those who know claimed they have moved on with their lives. In fact, a source close to the couple confirmed to Saturday Beats that their relationship is over.
The source claimed the lovebirds went their separate ways last December. Although the reason for their split is still unknown, the source was doubtful whether either of them was in a relationship.
“They have split for a long time now. In fact, I think it was since December. I don’t know why they broke up and I don’t know if Wizkid is in another relationship but they are no more together,” the source said.
When Saturday Beats called the singers manger, Godwin Tom, to confirm the split, he did not pick his calls neither did he reply the text message sent to him.
AdvertisementABUJA DOCTOR REVEAL THE UNIQUE WAY TO PERMANENTLY CURE WEAK ERECTION, SMALL AND SHAMEFUL MANHOOD AND INFERTILITY ISSUES WITHOUT SIDE-EFFECTS WITHIN SHORT PERIOD!! DON'T BE A VICTIM!! Click Here for More Details