Home National News Odd News Woman Burns Herself to Death Outside Police Station After Her Rapist Was...
Facebook
Twitter
WhatsApp 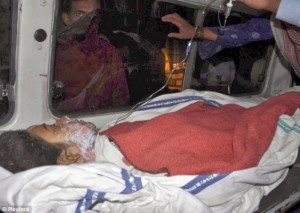 A Pakistani woman has died after setting herself on fire outside a police station when her alleged rapists were declared innocent.

The Pakistan Tribune reports that Aamna Bibi, 23, died from her critical injuries at Nishtar Hospital Multan on Friday.She set herself ablaze in front of several policemen at a police station in Bet Mir Hazar Khan in the Muzaffarghar district of Punjab province in protest over the release of her alleged rapist, Nadar Khan.Investigating officer Zulfiqar Ahmed declared Khan innocent after receiving 70,000 rupees (around £700 ) as a bribe.She was returning home from college when Khan and four others allegedly gang-raped her on 5 January

Amna’s mother said: ”
My daughter was so dejected after her rapist got bail that she decided to end her life.”

None of the policemen present reportedly tried to stop the woman from committing suicide.
Doctor Shaukat Malik of Nishter Hospital Multan said: “The girl had 80 per cent burn injuries. We tried our best to save her life but couldn’t.”
District Police Officer Usman Akram Gondal has suspended Ahmed and three other officials