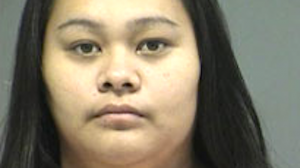 An Oregon woman on trial for the murder of her 4-year-old son believed the boy was gay and that was a motive behind the deadly beatings, a prosecutor said.

Jessica Dutro’s son Zachary died in August 2012, days after collapsing at the homeless shelter where his family was living southwest of Portland.

Washington County Judge Don Letourneau ruled Wednesday, after jurors were released for the day, that a Facebook message from Dutro to her boyfriend was admissible evidence, The Oregonian newspaper reported.

In the message, Dutro told her boyfriend, Brian Canady, that Zachary was “facing the wall” because he had made her angry.

Her son was going to be gay, she wrote, using a slur. “He walks and talks like it. Ugh.”

Canady would have to “work on” Zachary, she wrote.

The judge ruled additional web searches done by Dutro were also admissible. On Aug. 16, 2012, the day her son’s life support was terminated, Dutro searched terms such as anger management and parenting classes, prosecutors said. She also searched listings for free stuff and sex with strangers, they said.

Earlier this month, Canady pleaded guilty to manslaughter and assault for his role in the homicide.

The boy died of blunt-force trauma to his abdomen and a delay in medical treatment, prosecutors said.

Dutro, 25, is charged with murder, murder by abuse and second-degree assault.