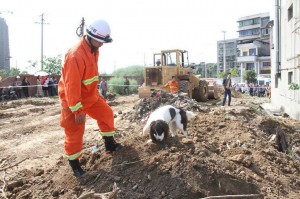 A 10-year-old Chinese boy was buried alive under tons of earth as he sneaked onto a building site to take a pee.

Xiao Hao was walking home with his mother Qiu when he was killed as he answered a call of nature on the site away from prying eyes in the city of Xiaogan in central China’s Hubei province.

Police believe that he died because the earth had either been disturbed and fallen on top of him or that a digger driver accidentally dropped the load on him.

Grieving mum Qiu said: “I let him go because he was desperate and I walked into a nearby shop, but when I came back he still wasn’t there.

“After waiting a while I tried to get onto the building site but they wouldn’t let me. So I called my family and we started searching around the site but saw no sign of him.”

In the end she called the police and, together with the builders, they searched the site – eventually discovering the boy’s body under a massive mound of earth.

Police have arrested the digger driver and are questioning him about the accident, while also checking to see if the proper safety precautions warning people to stay clear had been put in place.