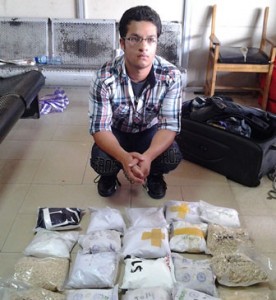 Operatives of the National Drug Law Enforcement Agency (NDLEA) have arrested a 19‑year‑old Pakistani, Iftikihar Muhammed Arslan, for attempting to smuggle 25 parcels of heroin into the country.

The suspect, who claimed to be a student of Punjab College in Pakistan, was apprehended at the Murtala Muhammed International Airport (MMIA), Lagos, by the operatives when the illicit drug was discovered in his luggage during inward screening of passengers on board a Qatar airline flight.

Preliminary investigation has shown that the suspect left Lahore, Pakistan with the drugs to Abu Dhabi, United Arab Emirates, then Doha, in Qatar, from where he connected to Lagos. He is believed to be working for a Pakistani drug cartel.

Spokesman of the agency, Mr Mitchell Ofoyeju, who described the incident as the single largest seizure of heroin at the Lagos airport since January, said the NDLEA commander at the Lagos Airport, Mr. Hamza Umar, found the 25 parcels of brownish substance that tested positive for heroin hidden in a smaller bag inside the suspect’s luggage.

Ofoyeju said the suspect was cooperating with the agency’s team of investigators.

Meantime, Arslan, who speaks English fluently, confessed how he got the drugs.

“I am a student of Punjab College and I am in Nigeria as a tourist because my friend told me that Victoria Island and Ikoyi are beautiful tourist centres. Unfortunately, when I arrived at the Lagos airport, the heroin was found in my luggage. This is my first time of coming to Nigeria and I had intended to spend a week or two.”

In his reaction, Chairman/Chief Executive of NDLEA, Ahmadu Giade, who expressed delight over the arrest, said Nigeria was winning the fight against narcotics.

“This arrest and seizure will further send a warning to drug trafficking cartels that Nigeria is winning the fight against narcotics. NDLEA is prepared to halt the criminal activities of drug barons through a coordinated drug detection strategies. We are working very hard to also identify other members of the criminal group.”

Vanguard gathered that the seized drugs weighing 25.400kg, have an estimated street value of N228 million.