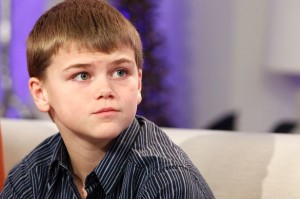 When three-year-old Colton Burpo’s appendix burst, doctors didn’t think he would survive surgery and warned his parents to expect the worst.

Distraught, his preacher dad Todd shut himself in a hospital room and started yelling at God in despair.

Colton not only pulled through, against all the odds, but was well enough to go home just 17 days later.

And he told his parents how – while the surgeons were fighting to save him – he visited heaven, sat on Jesus’s lap, patted his rainbow-striped horse and was serenaded by winged angels.

Now the youngster’s extraordinary story has been turned into a Hollywood movie called Heaven Is For Real.

And it caused a sensation over Easter in America, taking almost £13million at the box office and trouncing Johnny Depp’s latest film Transcendance.

Heaven is for Real opens in Britain on May 9 and is based on a book Todd wrote about his son’s astounding story.

Devout Baptist Todd – played on screen by Oscar nominee Greg Kinnear – and his wife Sonja at first thought their little boy was ­just repeating stories he had heard during chapel services.

But then Colton stunned his parents with a string of revelations.

He claimed he had met Todd’s grandfather, who had died 30 years earlier.

He said he had a conversation with a sister who revealed she had died while still inside Sonja.

And he even described rising from his own body then seeing his dad shouting at God while his mum wept.

Todd and Sonja insist they had never told him any of these things before.

Cynics have dismissed the stories as no more than a child’s fantasy.

And even Todd’s congregation in his tiny Midwestern home-town of Imperial, Nebraska, were sceptical.

But 10 years on, Todd, Sonja and Colton stand by the story of the ­youngster’s visit to the afterlife.

And Colton – now a 14-year-old school wrestling star and budding musician – uses his experience to comfort terminally ill children and their parents.

He said: “It helps the kids realise, ‘Hey, I don’t have to deal with all this pain… I got something better waiting for me.

“It also helps the family. It reassures them because if you go to heaven you’re going to have the time of your life.”

Colton talks to doomed children using live internet link-up Skype and tells them: “I’m not scared of dying because I know where I’m going.”

And as for people who accuse him of peddling fairy tales, he says: “Believe what you want but it won’t stop me from sharing what I saw.”

Part-time fireman Todd, 45, admits he was upset when members of his own congregation ­doubted Colton.

He said: “I expect it from the atheists but when you see a person who claims to be Christian attack you it’s awful.”

He confesses he had scoured the Bible in the hope of finding other accounts of ­experiences of heaven because he initially thought his son must have imagined it.

But that changed when Colton described his great-grandad and the sister lost in a miscarriage a year ­before he was born.

Todd recalled how the little boy said his long-dead relative was known as Pops – and picked out a photo of him as a young man in the 1940s. Todd is adamant he’d never mentioned Pops to his son.

Later Sonja was shocked when Colton claimed he met his unborn sister and said: “She told me she died in your tummy.”

Todd and Sonja insist they had never talked about the miscarriage because they were so traumatised by it.

Nor did they tell him where they were when surgeons were battling to save his life – another reason Todd is convinced his son didn’t just dream it. The preacher said: “They didn’t think Colton was going to make it. When they tell you people aren’t going to make it, then they don’t.

“I found a small room, slammed the door shut and screamed at God.”

Months afterwards, Colton related how he had seen the whole thing.

The youngster told how he rose off the operating table as angels sang Jesus Loves You to keep him calm.

He claimed he sat on Jesus’s lap in heaven, saw Mary praying at God’s throne and talked to John the Baptist.

They also point out the youngster didn’t clinically die during surgery, ­unlike many others who claim to have visited the afterlife.

But Todd said: “There’s no medical explanation for all this – there is only a heavenly one.

“We seem to avoid talking about things like life and death until we are confronted with them, like at a funeral.

“But it can be comforting to know there is more out there.”

Todd has denied accusations that he exaggerated his son’s claims to boost sales of his book, also called Heaven is for Real, which spent three years on the best-seller list in the US.

He said: “People say we did it to pay our medical bills. No we didn’t.

“Fewer than 10 per cent of books make anything in royalties. People don’t ­understand that.”

Colton lives with his parents, sister Cassie, 17, and brother Colby, nine, in the modest house the family have always called home.

And Sonja makes sure he stays ­grounded about his heavenly experience.She said: “His friends think it’s no big deal and we think that’s healthy.”

But sceptics warn against taking Colton’s divine claims as gospel.

Atheist author and academic Susan Jacoby wrote: “Only in America could this book be classified as non-fiction.

“At age four, an inability to distinguish between fantasy and reality is charming. But among American adults, widespread identification with the mind of a ­pre-schooler is scary.”

And John MacArthur, a California-based Baptist minister and writer, said: “I’m convinced the entire book is a hoax from start to finish.”

Even the film’s director Randall Wallace – who wrote Braveheart and whose ­parents founded a church in Tennessee – admits he was a sceptic.

He said: “It was crucial I had doubts about Colton’s story.

“If someone is trying to convince me of a dogma, I’m not interested.

“But if someone is recounting an ­authentic experience, I’m fascinated.”

American audiences, especially across the deeply religious Midwest, have flocked to see the movie.

And even hardened reviewers have admitted to weeping throughout.

But he insists their version of the ­hereafter isn’t a patch on the real thing.

He said: “They do a good job but they haven’t experienced it like I have.”

Colton added: “Heaven is just so much better than that.”