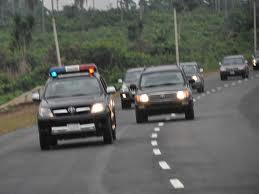 A group of hoodlums terrorizing residents of Dugbe area in Ibadan, Oyo State, were on Friday dislodged by the convoy of the state governor, Senator Abiola Ajimobi and his Imo state counterpart, Owelle Rochas Okorocha.

This was contained in a press statement by the Special Adviser to the Oyo State Governor, Dr. Festus Adedayo.

According to the statement, the hoodlums had been operating unchallenged in the area shooting guns and wielding machetes before the arrival of the governors.

The governors, who had just left the burial ceremony of the mother of Chief Niyi Akintola (SAN), were on their way to the Rochas Okorocha Foundation in the state when they heard sporadic shots from the hoodlums and ensuing stampede from the adjoining market in the area.

Initial information collated suggested that the hoodlums were members of rival factions of the road transport union.

The statement noted that the governors’ convoy then came to the aid of the fleeing traders to dislodge the hoodlums before reinforcement was called from the state police headquarters and the state crime-fighting outfit, Operation Burst.

The casualty figure could however, not be ascertained.