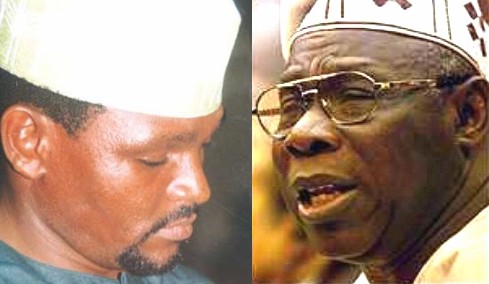 Major Hamza Al-Mustapha, yesterday denied allegations that he beat up former President Olusegun Obasanjo during his (Obasanjo’s) incarceration in prison. Al-Mustapha, who was a former Chief Security Officer to the late head of state, General Sani Abacha, was a well-feared military officer during that military dictatorship era.

Al-Mustapha said he rather helped Obasanjo with his personal upkeep at the various prisons, due to the respect he had for him as a former military head of state and an elder statesman.

Obasanjo was incarcerated by the late dictator – Sani Abacha – over trumped up charges of plotting a coup to overthrow the military regime.

The former CSO, who spoke on the Hausa Service of BBC, monitored in Kaduna yesterday, also denied ever beating anybody incarcerated by his boss or stood in the way of freedom of anyone in his entire life.

Said he: “I have never beaten Obasanjo and I never beat up anybody. Obasanjo lied on me and God will be the judge between me and him.

“When Obasanjo was arrested on charges of coup attempt, I was the one who gave N10, 000 for the purchase of bed sheet, pillow sheet and brush.

“Also, when he was moved to Jos prison, I and governor Manah used to buy him food items from NASCO Company. All these assistances I rendered were due to his position as a former head of state and an elder person”, he said.

Al-Mustapha added: “I had no intention whatsoever for someone to pay me back what I did to him”.

When asked to clarify the statement made on a number of occasions by the former president that he was abused in prison by the former CSO, Al-Mustapha said it was a tissue of lies.

“You can see during Oputa panel, he refused to show up”, he said, adding that “Up till today, he has never agreed to meet me personally”.

When asked whether he would support President Goodluck Jonathan in the 2015 general elections, the former CSO evaded the question preferring instead to keep his options open.

“I cannot say anything until when I am done with the court’s appeal case and with the military. Until such a time when I would announce to the whole world about my decision, after I am done with all these cases”, he said.