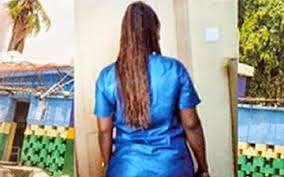 The Divisional Police Officer (DPO) of Onikan police station, in Lagos, Mr Adekunle Awe, who was accused of cajoling a woman into having unprotected sex with him in his office, reportedly wept in the cell where he is being held pending when investigations are concluded into the matter and he is charged to court.

The victim, Idowu Akinwumi, 31, accused Awe of having carnal knowledge of her and threatening her life, before allegedly extorting N30, 000 from her and five other suspects, on April 15.

Akinwumi, who was said to be a cook in an eatery, was arrested and taken to the police station on the orders of her employer, who frowned at the discovery that she camped a male companion overnight in her apartment that was owned by the eatery. She was arrested alongside five others including the strange man identified as Friday.

A source at the state police command headquarters, Ikeja, where the DPO was being held, disclosed that Awe was shedding tears in the cell and blaming his predicament on the devil on Good Friday.

The source added that Awe was heard cursing the devil for bringing the suspects his way and landing him in trouble. He prayed that God should intervene in the case and protect his job.

Information Nigeria earlier reported that the DPO was detained alongside two policemen of the rank of inspectors.