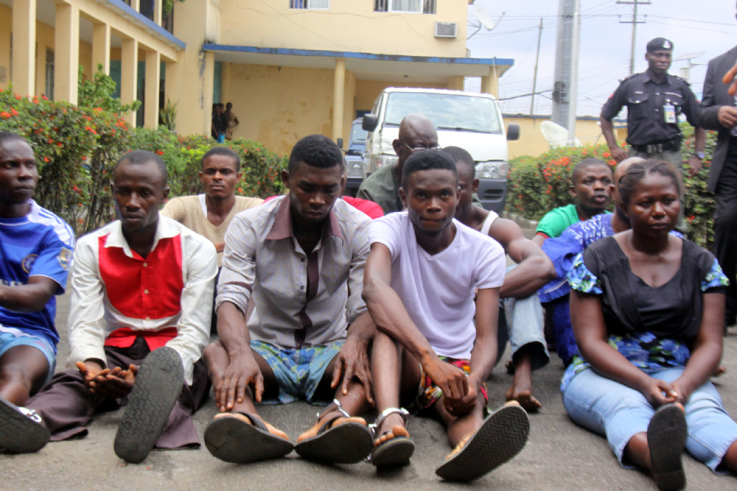 A former police sergeant facing murder charge over the killing of four University of Port Harcourt students told a High Court that the mob overwhelmed a police team sent to rescue the students.

The accused, Lucky Orji, was charged along with 11 other persons in connection with the killing in Aluu Village in October 2012.

Some other suspects are still at large.

Mr. Orji told the court on Thursday that the police patrol team, of which he was a member, could not rescue the students because it was overwhelmed by the mob numbering about 3,000.

Mr. Orji, the 2nd accused person, added that the Divisional Police Officer, DPO, in charge of the area had ordered the team to pull out of the scene of the incident.
Led in evidence by his counsel, Uchechukwu Oputa, Mr. Orji said that the DPO’s order came on the heels of a distress call by the team’s commander to the DPO.

According to Mr. Orji, the commander had told the DPO that “the team was facing mob of over 3000.”

Apparently contradicting himself, Mr. Orji also said that the police had rescued the students and took them to the police patrol vehicle, but did not tell the court what happened thereafter.

The prosecution had alleged that the accused person took part in the murder of the four students instead of protecting them in line with his constitutional duty.

The prosecution, led by Rufus Godwins, the Rivers Solicitor-General, said that Mr. Orji had used the butt of his AK47 assault rifle to hit one of the victims.

Mr. Godwins had made an oral application to the court for the video footage of the scene of the crime to be played to prove his point.

The video footage was played and Mr. Orji was captured in the footage hitting one of the victims with the butt of his AK47 rifle, but he denied that he was the very policeman in the footage.

According to him, an inspector had slapped him, while forcing him to sign a statement he alleged was written by Raphael Ezechi, a Deputy Superintendent of Police, DSP, and prosecution witness (PW1)

He also claimed that the police team was attacked by the mob, but on cross examination by the prosecution, he denied that the mob attacked the police.

The prosecution said it had proved that the two statements made by Mr. Orji were made voluntarily and urged the court to admit them in evidence and mark them as exhibits.

The trial judge, Ledan Nyordee, adjourned the matter to May 5 and May 22, 2014, for ruling in the trial within trial and continuation of the case.

Share
Facebook
Twitter
WhatsApp
Previous articleZamfara Attack: Govt Gives N.3m Each To Families Of Dead Victims
Next articleIce Prince: “I Can Start Thinking Of Marriage When I’m In My Late 30’s”
- Advertisement -