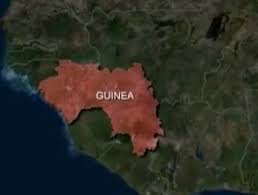 A crowd of people angry about an Ebola outbreak that has killed 86 people across Guinea have attacked a centre where people were being held in isolation.

The violence took place in the southern town of Macenta, where at least 14 people have died since the outbreak emerged last month.

The mob of people who descended upon the clinic accused ‘Doctors Without Borders’ health workers of bringing Ebola to Guinea, where there had never previously been any cases.

Guinea’s government swiftly condemned the attack, saying that Doctors Without Borders and other international aid groups were key to stopping the spread of Ebola.

“The international community has rapidly mobilised to help us in these difficult moments with considerable medical support and specialists on the ground at the disease’s epicentre,” the statement said.

“That’s why the government is calling on people to stay calm and allow our partners to help us eradicate this epidemic.”

There is no cure for Ebola, which causes fever and severe bleeding, and up to 90 per cent of patients die from the strain that has been detected in Guinea.

A total of 86 people have died so far from Ebola in Guinea and two other confirmed deaths have been reported in neighbouring Liberia.

Authorities in Mali are also investigating three suspected cases of Ebola, and have sent samples overseas for testing.